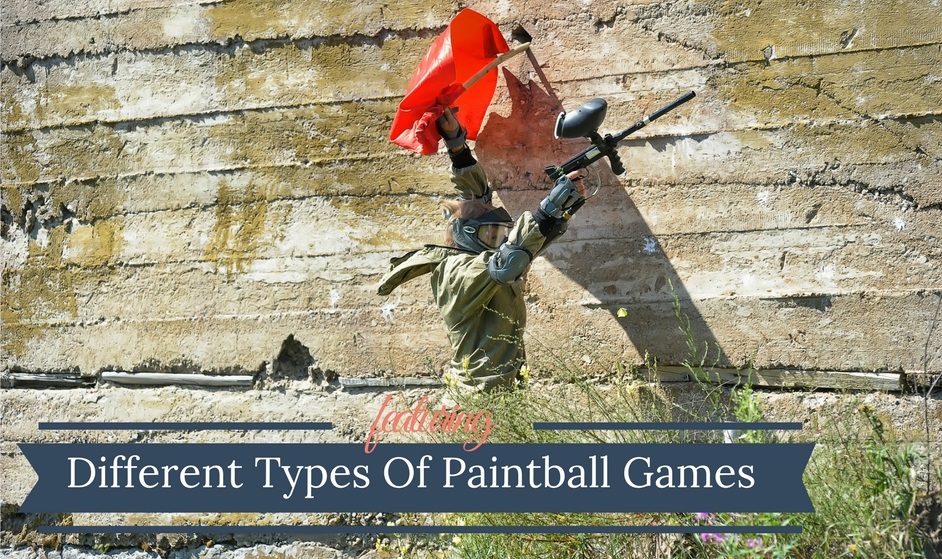 Think you’re an ace at video games and want to relive your first person shooter games in real life? Paintball is the easiest and most fun option, one that takes you over different scenarios, terrains and even actually handling the equipment in a team based situation.

Before you think it’s just a point and shoot game, think again. There are different types of paintball games, ones which test your skill, your endurance, your strategic planning, tactics and team work.

Let’s take a look at the most popular paintball games, and how to play each one of them.

​There are many variations of this popular paintball game.

​A flag is placed in each enemy camp, visible to both teams. Each player must know the location of the flag, and of course, the defending team must not hide the flag they are protecting. These flags will be located on extreme ends of the gaming area, and the goal of this paintball game is to capture the enemy’s flag and bring it back to your home base before your flag is captured by the enemy, all without getting shot.

This attack and defend game reveals the teamwork and strategic planning of each team as they try to claim the enemy’s flag and bring it back to their home base.

This paintball game is perhaps more challenging because neither team holds any advantage. One flag is placed in the center of the playing field, with both teams having to get at the flag. The goal of this particular paintball game is that your team has to get control of the flag and bring it back to your home base before the enemy team gets to it first. Of course, it goes without saying that you shouldn’t get shot while retrieving the flag. The rules are mostly the same as Capture the Flag, but instead of having two flags, there is only one central flag.

Many feel that this type of paintball game is tougher as both teams vie for the single flag from a central point.

Instead of having a flag to capture, the teams can choose any object – a box, a t-shirt or any random object and designate that as the ‘Bomb’. The aim of this game is to get the bomb as far away from you as possible – either to the center, or to the enemy base. The team that gets the ‘bomb’ to the enemy camp is the winner of the game.

This elimination paintball game is the original one and it works when one team completely eliminates every player on the opposing team. You can choose to play with one life or multiple lives, depending on how long you want your game to continue for. Depending upon how you set it up, a player can be shot once, twice or more times.

Each time a player is shot, they have to return to the starting point where they can then re-enter the game. Even if a player is shot multiple times in quick succession in the span of just a few seconds, it counts as only one life lost. For fairness, the player should head back to the starting point before another life can be lost. This is a great way to ensure that the game lasts longer as these elimination games can be over before the blink of an eye if you have a very skilful sharpshooter on your team.

Another point makes a longer game interesting because you are allowed only a limited amount of paintballs in your game. So this makes you aim better to make each shot count. And if you run out of paintballs, you can always ask for more from your team players who have any to spare. Magazine fed guns are a good choice for deathmatches.

To up the playing field, this strategic paintball game involves the collection of markers by the teams which are located at various points around the course. These could be any objects or stamps that are set up at various checkpoints, and the goal of the team or player is to collect the most markers.

You can choose to play this alone or as part of a team. The rules of this game can vary depending on the way you want to play it out. As the goal of this game is to collect all markers, you will have to utilise strategy in this timed game.

The team with the maximum number of markers wins the game. You can also choose to award certain players additional points which would add to the overall team score. This could happen when they visit all checkpoints within the timed limit, or if all team players managed to visit the same checkpoint.

The teams should not be too large, and competition can be fierce, with the recommended teams being limited to five players each. Players that are eliminated will not have their scores added to the total team score, which makes the challenge of succeeding without getting eliminated a tough one, but worthy of the victory in the end.

There are various versions of attack and defend games (the above games could also fall in that broad umbrella), but the ones mentioned below are the ones which most players are familiar with, and pose the most challenges as well as fun on the playing field.

Instead of flags or inanimate objects, this game involves capturing players of the opposite team. When you hit the player of the opposing team, they are considered to be your prisoners and are taken to your base where they are held captive. The team with the most amount of captured prisoners wins the game.

Wait; there is a twist to this. Not only do you capture the opposing team players, but the opposing team has chances to retrieve their captured comrades. All they have to do is get into your base and tag their player for them to escape. This may be easier said than done, but it gives the opportunity to increase your paintball playing time. You can choose to play within a limited time frame – but what this game really needs is great strategic playing skills.

This is similar to POW, as it involves rescuing hostages – the same rules apply here. In this case, one team ends up with one player from the opposing team, and the mission of this game is for the other team to rescue their captured player.

The hostage has to be rescued from the enemy base and has to be taken to a holding area which is known as the sanctuary. There are instances when the rescuing team has to take cover to avoid being eliminated and vice versa and when that happens, the hostage is left where the player is and the hostage should wait at that same spot.

What brings an interesting twist to this game is that the game ends if the hostage is hit. Whichever team hits the hostage loses the game, and this makes it harder for the capture team to eliminate the rescue team, especially if they are close to the hostage. The game continues until the hostage reaches the Sanctuary or if all players of the rescue team are eliminated by the other team.

Just when you thought everything was black and white – with attack and defend rules being pretty clear, this game comes along. Each player of a team is given certain secret roles which other players have no idea about – how this works? You need a deck of cards to make the selection process easier.

You need two kings (for the two team captains), 2 jacks (also known as the traitor cards) and a certain number of cards (make it the same suit so that the teams selection is easy) that equals to the amount of players left in the game. Each person will draw a card, and the team captains will then take charge of their team, trying to lead them to victory via the normal attack/defend tactics of a standard paintball game.

At some point of time, the traitor will turn against his/ her team at a point they think is good, with the game ending when the king of the opposing team is killed off.

What makes this game interesting is that nobody knows the identity of the traitor, so you have to be wary of your team members, as well as watch out for the attack of the opposing team.

This is not a team game, but a play-for-your-own victory kinda game. Prior to the game starting, each player writes their name on a piece of paper which is then put to a draw where players randomly pick up a name from the draw. Nobody reveals the identity of the player’s name they picked, and the goal of this game is to eliminate that player from the game, without being eliminated yourself. And, to make things a little tougher, you can’t eliminate a player other than the player you picked from the draw. Last person not eliminated on the battlefield wins the game.