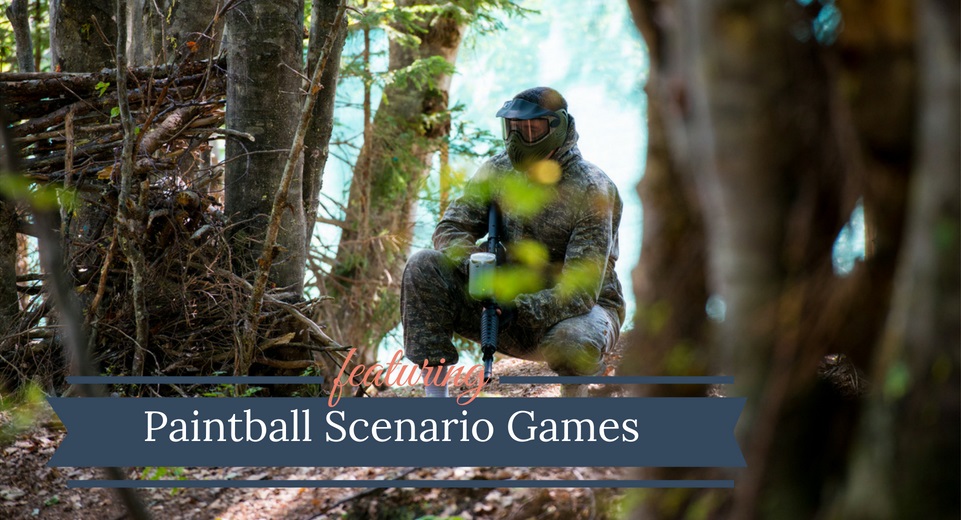 Getting into a role or character, playing a part in a competition, and helping your team to victory? If any of those objectives sound appealing to you, then scenario paintball might become your next favorite sport or weekend event

What Are Paintball Scenario Games?

If you are just familiar with paintball games, scenario paintball regards the same basic rules but incorporates the game into a story, like a historical re-enactment or a futuristic video game simulation.

These games don’t necessarily require more serious players but they do ten to last a least a few hours up to a couple of days—so if you are just looking to shoot around for a bit, this might not be for you.

Players can score in paintball scenario games by completing objectives or missions. These missions can be as simple as capturing the opposing team’s flags or as elaborate as standing, non-playing characters, a secret plot twist, and massive, game-focused props.

These props can be also used in the game and are not just “obstacles” on the playing field. They can be created as objectives that need to be collected. In these scenario games, it’s not uncommon to see players dressed in costumes and tanks rolling around the arena or field.

These games are designed with sometimes even months of planning—by producers, the managers of fields that host them, and even the players. In some cases, it’s a tradition to gather once a year to play a huge scenario paintball game with one another, however, more on that later. It’s important to have some sort of organization set in place, no matter how big or small the scenario game is.

Since most of these games have certain numbers of players and is usually run on a huge field for a long period of time, more often than not are the players allowed to return to the match after a set period of time.

The type of game, rules, and setup will vary from game to game.

There are various types of designs that can take place in these paintball scenario games. A director or creator can draw simulations from actual, historical events, TV shows or action movies, and even books—the source of creativity is limitless.

The games are designed to last an entire day, generally from eight to twelve hours or can even be run overnight, with a 24-hour long event.

It may seem impossible to play all day like that, however, players often come prepared—with camel bags full of water and food.

Depending on the match and the event planning, the game can either be an entire, long continuous match or can be broken up into smaller missions and shorter periods of time.

Players that participate in these games can sometimes be assigned a role, depending on the type of match. These roles normally adhere to the storyline created. Think of actors in a movie—some have starring roles and some have minuscule roles, like “angry villager”, etc.

Players may also be assigned roles that have special game abilities that are identified specifically to help their team. In these cases, a player may be assigned as a medical expert that can “heal” players or a “demolition expert”, etc.

The roles can be displayed on an identification card that most players carry throughout the game. These roles can extend off the field, as well, having each player still “in character”, as long as the game is still going.

If you have ever played outdoor paintball and are envisioning the field—think much, much bigger than that. Facilities will often combine normal fields together to create a huge playing area with an out-of-bounds tape to signify the boundaries. However, these games aren't limited to arenas or facilities. They can be played at speedball fields, castles, wooded areas, urban environments, and more.

Used to tap into the role-playing aspects of the scenario, the props used are often small, easy-to-make and serve a specific purpose in the game. They can be anything—from a box of explosive to paper money only to be exchanged within the game. The props can also extend to elaborate costumes worn, rocket- and grenade-launchers, electronic bugs, and walkie-talkies.

There are also props that are scattered among the fields that count for points when collected and brought back to a team’s base.

From basic paintball guns to military simulation—“Mil-Sim”—style guns, players will take their pick (or just play with what they have) when playing paintball scenario games.

Of course, these games tend to last hours and even days long, so it’s within the player’s best interest to pack light and wear light, often resourcing back to equipment worn in woodsball games. Players often also wear vests that look like bulletproof vests and rely on camouflage jackets and pants to remain best hidden during the game.

During a game, players may be responsible for maps, IDs, night vision, radios, and packs and packs of water—which can get pretty heavy, especially when playing for days.

Interestingly enough, to make the games even more realistic, it’s possible that tanks are a huge prop incorporated into the game. However, these “tanks” aren't usually the large, military tanks you're thinking of. They can be constructed by using golf carts, ATVs, and 6x6s.

To keep players safe, however, the tanks generally can only drive no more than 5 mph and players have to keep their distance—about 10 feet away from a tank at all times.

In some cases, there are teams that a player can be a part of that go around the world and participate in scenario paintball games—for strict competition. Just like with any sport, these teams can be recreation—often playing just for a fun, with a chance for friends to get together or they can be competitive, looking to score as many points and win as many games as possible.

Just like with the World Cup or worldwide competitions, scenario paintball also is played around the world. DFW Adventure Park in Roanoke, Texas is host to four games a year, sometimes bringing in 500 players per year. Biggame Germany in Mahlwinkel, Germany is host to 2000 players 2 times a year.

Whether you are just a beginner or looking to take your paintball game to the next level, scenario games can be a fun, intricate way to get involved, have fun, and play paintball.