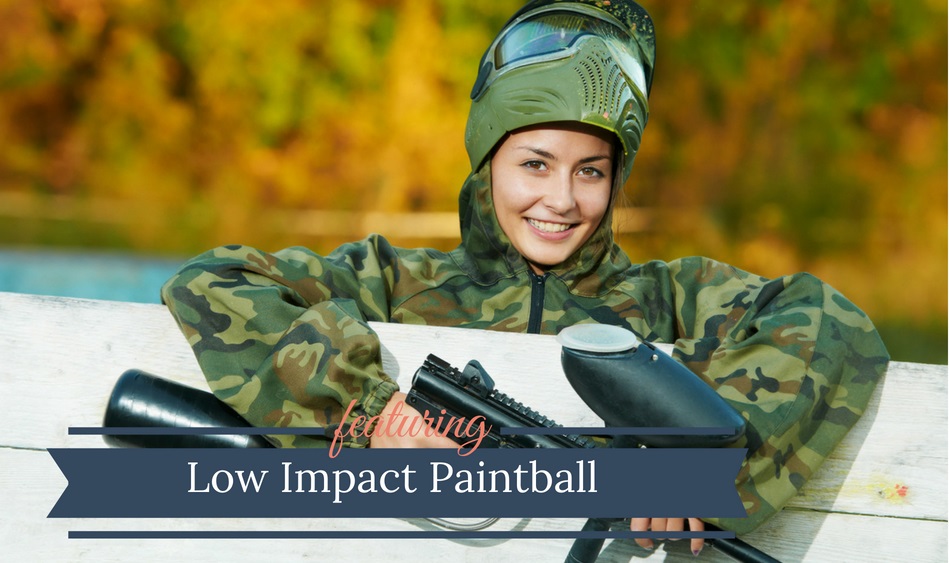 The number one reason why most people who are seemingly interested in paintball but turn away is that they've heard or felt how much it hurts to get struck by a paintball.

For those a little skeptical about playing paintball because of the imminent sting of the shot, there’s low impact paintball.

The design used in the low impact paintball guns equipment, is specifically engineered to eliminate the speed that is normally issued from a regular paintball marker. With a slower speed when it travels, the weaker the shot will be, making it much less paintball.

This is because the paintballs are constructed using more lightweight material—much lighter and smaller—than the traditionally-designed paintball.

If you are hesitant about letting your child play paintball, it’s suggested for them to sign up for low impact paintball. Perfect for children’s birthday parties, this is a great opportunity for your kid (and you) to get used to paintballing before moving on to traditional paintball. With this style, you can maneuver and play freely without that fear of getting hurt, which might come with traditional paintball.

Designed With Children In Mind

Especially since most parents opt for their kids to start off playing low impact paintball, the equipment is catered to the size and strength of an 8-12-year-old player. This means that players don't have to suffer under the weight of equipment designed for adults. It is created to be half the weight of standard paintball equipment.

To be specific, there are a few differences between regular paintball and low impact paintball that you can see with the equipment:

This type of paintball, as we mentioned earlier, is created with a child in mind. Therefore, the paintball used in this style of game hits with about one-third of the original stinging sensation that one may feel in a standard game of paintball.

In low impact paintball, the caliber is about half the size. The players playing low impact use a size .50 Caliber, which is much smaller than the standard .68 caliber paintball. Since there is a size difference, the weight is also affected. This makes the equipment much easier to carry around.

To look at it in a realistic way, the gun will weigh just as much as a paperclip. Low impact markers are .50 inches in diameter, which makes them much smaller, much lighter, and much more fragile than the traditional .68 caliber paintball markers.

However, size is not the only concept factored into the equation here. The sting produced by the paintball also relies on the velocity and the distance from which it is shot to its target, which are extremely impacting factors.

When looking at the lighter weight, you can see how it has a direct effect on the average paintball velocity. When calculating the amount of force a low impact paintball has and comparing it with the standardized version, the low impact marker will give players much less sting upon impact. This is ultimately where the appeal comes from. In most cases, kids are strategically, mentally, and capably ready to play but just can’t handle the sting of the paintball. This version of paintball makes it easier and more possible to play and enjoy the game of paintball for this age group.

The Difference in Equipment

Low Impact Paintball guns are much smaller and lighter, as we already mentioned. Although this is an advantage to the younger players playing, it is also a disadvantage in the game’s certain aspects. For instance, the reduction of the size of the equipment will lead to the fact that not as many games can be played back to back. This reduced size will also cause the player to need to refill their marker much more often because of the reduced volume of usable air.

Even though this type of paintball was specifically designed with the child in mind, there is still an age restriction when it comes to low impact paintball. You still have the discretion as a parent to allow your child to play or not because even though it is safer for your kid, there’s still the opportunity of your child getting hurt. You should also factor in their mental capacity at a young age to be able to understand and abide by rules, follow through with strategy and tactics, and be aware of their surroundings.

However, most facilities do have an age restriction on low impact paintball (as well as standardized paintball). Normally, to play Low Impact Paintball, the child has to be at least 6 years old. The general age to play Standard Paintball is 10 years old.

The great news here is: You don’t have to be a kid to play low impact paintball! The style of the game was designed for everyone who is looking to enjoy playing the extreme sport of paintball without the impacting sting caused by a shot.