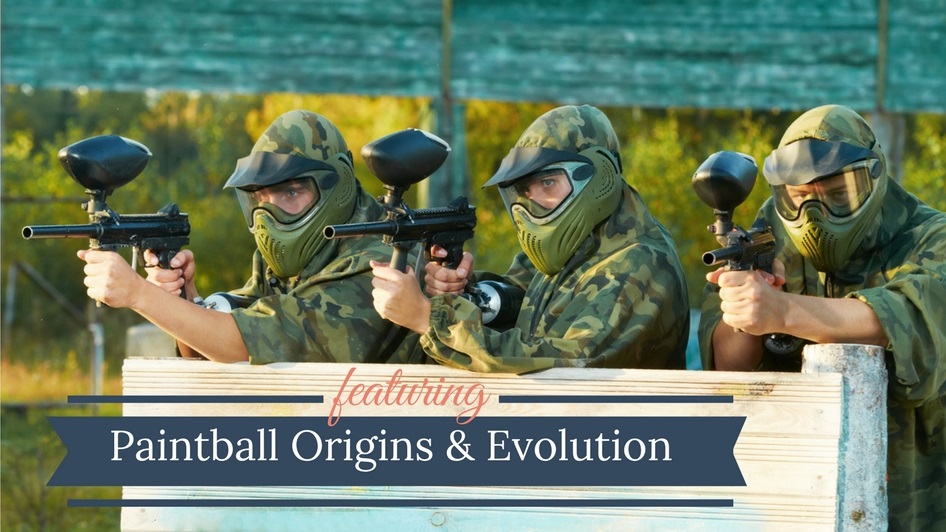 According to the Sporting Goods Association, they have ranged that around ten million Americans across the country play paintball. However, its popularity hasn't limited to just this generation. The origins of paintball can be traced back a few decades.

Combining outdoor hunting and that survival adrenaline and the idea of hunting, paintball was invented.

How It All Started

Although it doesn't date back necessarily to 1940, history just traces back a few spray paint devices, which were patented by Charles and Evan Nelson. These devices had a ball that was injected with paint and surrounded by an encapsulated gelatin. Sounding like the modern paintballs of today, they didn't break until impact.

However, the first gun was created by Daisy, which was a popular company associated with air guns, which decided to launch the “Splotchmarker”.

The game quickly gained national attention and grew rapidly in the 1980s. As the game became more popular, the guns and equipment became more developed.

From the beginning to now, paintballs have changed from being oil-based paint to being filled with the vegetable oil and dye that it is today. On the market, you can buy paintballs that are actually scented, glow-in-the-dark, and other varieties. The material they use today is completely biodegradable and non-toxic, which means it isn't harmful to the environment. The paint is also generally washable, however, since you usually are wearing protective gear and your paintball clothes, you shouldn't be too worried.

In the beginning, the game was only played outdoors. However, as it developed in mass popularity, they moved the game indoors, on huge indoor courses and fields.

The equipment has also evolved. You can wear protective gear from eye masks to different clothes.

From different fields to different materials, from brands of equipment to markers, there are so many different ways to play the game.

Depending on whom you play with the game of paintball can change and differ with rules and boundaries. In some facilities there might be a limit on firepower, on the field there might only be a certain supply of material to reload your marker with CO2, for example, and you have to adjust accordingly.

But digressing to the fun part — there are a few ways that you can enjoy paintballing.

Here are just a few way that you can enjoy paintballing: Central Flag: This is a game commonly called “capture the flag” where two or a few teams are playing with the attempt to be the first to capture the flag.

Super Air Ball: This version of paintballing has a broad range of obstacles on the field where within the mix there is a center flag or two flags, which is the goal of the game. Usually, these obstacles are inflatable — just in case.

Two banners: Another version of capture the flag, this version of paintballing has two or more teams involved where each has their own flag to protect. The goal of this game is to capture the other team’s flag.

Speedball: Not straying too far from the other versions, Speedball is generally played in a smaller location hence the fast shots and accuracy, with a center flag or two flags on a field.

Hyperball: One of the games most commonly found at public tournaments and competitions, Hyperball has one or two flags and has a lot of obstacles in an indoor or outdoor field.

Elimination: Another common game, this is an every-man-for-himself style game. Individually playing or playing on teams in dodgeball-style, your goal is to eliminate your opponents until only one player stands at the end of the game.

You could say that paintball is still a relatively new sport. The first paintball game was played almost but not yet, forty years ago. When comparing it to other sports, it’s still a baby, which means, it can only get better. Looking back from where it came to where it is today, you can see the evolution and improvements in less than half a century of existence. Therefore, you can only imagine how much better it can get.