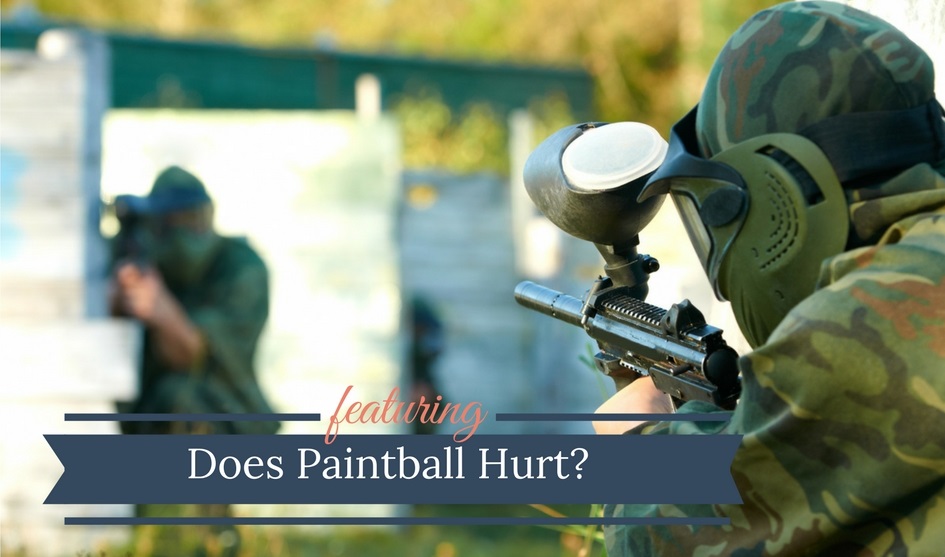 Banter in the office has seen me signing up for a paintball competition with the boys. My first thought was that it would be a nice way of getting closer with my colleagues and my manager, until I spoke to my wife about it. How much does paintball hurt? Was all she asked. Nobody seems to be able to answer that question so I actually wonder: does paintball hurt?

I have never been a cry-baby. In fact: I have been anything from. Before I even managed to walk around properly I had been hospitalized twice with a broken limb. In both cases I had crawled up a chair and decided it would be good to crawl up the backrest even further until gravity called me back. According to my mom I didn’t even shed a tear but I did secure them the unwelcome attention from social welfare employees.

How Much Does Paintball Hurt?

The question: how bad does paintball hurt? Is actually a question that is impossible to answer. What hurts you might not even be felt by somebody else. But what I can tell you is that being shot at close range, in a direct angle and on your bare skin will certainly hurt no matter how tough you are. If you have ever paid attention to the science lesson about ‘speed’ and ‘small-scale point of impact’ you will understand.

The same applies for when you are being shot in your face, the groin, on your back, at the bottom of your feet or in your hand. Simply ask your biology teacher to explain it once again that these are the body parts that are either highly sensitive or hardly being protected by e.g. muscles covering the soft tissue. Instead of wondering how much does paintball hurt when you are hit in these parts, rather worry about how much damage being shot here will cause, as there is no doubt you’ll get hurt anyway.

What Hurts More Paintball Or Airsoft?

If you don’t want to give in to your colleagues but still want to avoid pain when being shot in a game, you might want to consider a safer alternative. That is; if you know what the safer alternative is. Some say airsoft is a good alternative but here is the catch. The small plastic pellets fired by an airsoft gun travel faster than a paintball shot from a paintball gun. Sure, a paintball will hit a bigger surface but the pain it inflicts will die away easier. Having that said we must point out that a paintball can break the skin. On such occasions it can take a bit longer before the wound has been healed. That will leave you with some discomfort and annoyance but if we look at the question: does paintball hurt? We’ll have to say that the pain will fade away quickly.

How To Protect Yourself While Playing Paintball?

If you don’t want to answer the question; how much does paintball hurt from experience, you’ll be advised to take note of the following lessons.

The best thing you can do before you start is to discuss and establish clear rules of engagement. What is allowed and what will be strictly forbidden? Have it discussed first and make sure everybody is comfortable with it. Determine what it is that people fear most and try to find common ground or ways around it. If everybody is clear about which body parts are off limits or what distance should be respected to fire a paintball gun, you will have won the first battle as you will know for sure that everybody enjoys the experience. If will also avoid unnecessary discussions afterwards and will contribute to whoever is the winner being a clear winner.

The second best thing you can do is wearing protective gear. A helmet is advisable as are gloves, body protector, elbow- and knee-protectors and shin-pads. Men are also advised to wear a groin protector. Should they decide to play paintball without the consent of their partner, we advise them to keen wearing it even when the return home safely! It is important that you will select protective gear that will fit you nicely without putting too much pressure on your body or being too tight. Remember: you’ll often try protective gear on when you are relaxed and prior to having an extensive workout. Once you start running, climbing or jumping your body warms up and will expand. The same applies for gear that protects knees and elbows. They should allow you to remain flexible.

With protective gear in place you’ve virtually covered all steps. The other thing you should do and remember is that you should never turn your back on the enemy. It is the obvious thing to do from a competition point of view. But it terms of the question; how bad does paintball hurt, we can tell you that the back is one of the least protected parts of the body. Strangely enough most protective gear seem to forget about this.

Something that is relatively easy to do is to put on multiple layers of clothing before you go to the paintball farm. They often issue you with an overall which is mainly done so to avoid your clothing gets stained from exploded paintballs. By wearing another long-sleeve shirt (or perhaps two) underneath it, you will certainly soften the impact when being hit. The same applies to pants. Be careful which pants your chose. Believe it or not but I tend to advise anything but jeans. Jeans are cool and jeans are great but it is the worst fabric to deal with when you want to minimize pain.

Being shot in your foot is highly unlikely but I still advice you to pay attention to the footwear. You’ll do a lot running and climbing often without you really being aware of what you are doing as your adrenaline rush is pushing you further. Wear good and comfortable footwear will contribute to your experience of the game and will prevent you will get injured like spraining an ankle.

You will surprised to learn that common injuries those playing paintball often experience include bruises, cuts and welts. That’s because the game is often played in the woods and expects players to hide behind walls or trees. More serious injuries players experience include sprain or twisted ankles or broken limbs from running and falling while carrying the paintball gun. Obviously people get injured from being shot too. Eye or ear injuries are apparently the most reported injuries. But these injuries only came at the bottom of the list and, in fact, could have been prevented when protective gear would have been worn.

I also found a few references to death but most people that died while playing paintball passed away from a heart attack. Playing paintball is not for the faint hearted and it also requires a good physical condition. If you are an office jockey I advise you to first start doing some exercising before you participate in a paintball fight.

The pain that was not listed and which is not really explained is the pain you will experience when losing a fight especially when it is being played with co-workers. The humiliation you’ll have to endure and experience when you are being shot and ‘killed’ by that ‘dude that always does the admin’ or the intense screaming you might have to hear when ‘that girl from reception’ realizes she just messed up her kit….That can be more painful and inflict serious wounds you’ll never be able to recover from.

Having researched the question: does paintball hurt? I have come to the conclusion that, providing you will take some basic measures, the game itself won’t really hurt you. You should be more worried about what will happen to you afterwards when you have to endure the taunting of your coworkers or the wrath of your wife when she will have to deal with the consequences like nursing your bruised body or dented self-esteem.