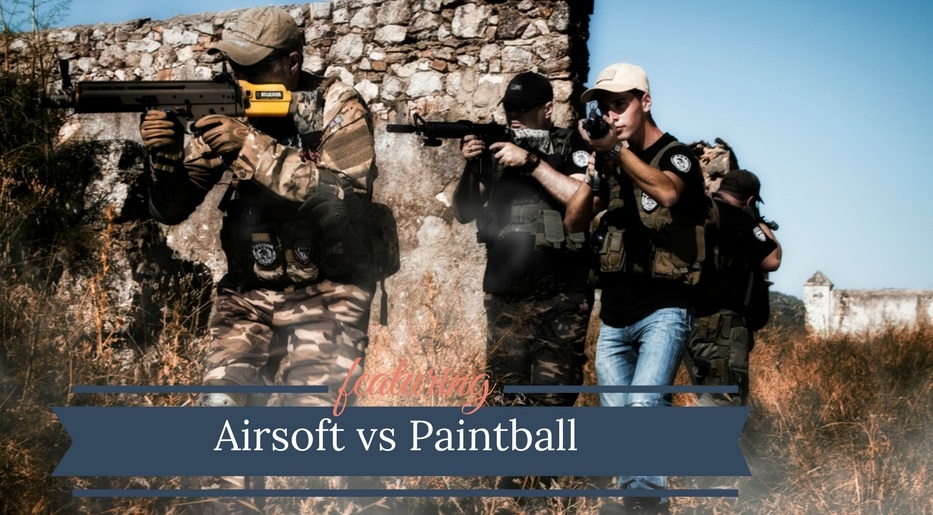 Combat simulation is not just popular, but it is really fun to do. While paintball might be better-known, it is not the only type of combat gameplay that is out there. Airsoft is another popular form of combat simulation, but it should not be confused with paintball.

When contemplating paintball vs airsoft, remember the two have similar objectives, where you try to take out your opponents using non-lethal guns, but the method of play is very different between the two. If you have been considering trying out paintball or airsoft, it is important to understand the differences between the two sports.

The two sports have not only different guns, but the rules and methods of play are different as well. If you play paintball already, you will find airsoft to be a new experience. You might discover that you do not enjoy airsoft as much as paintball, but regardless, it is a unique experience.

Airsoft guns and paintball guns, while both are meant to resemble live action guns, are not made the same way. The guns operate differently as well and before you decide between airsoft vs paintball as a sport, you need to understand what the real difference between their guns is. There are several types of paintball guns that you can use, depending on the type of paintball game that you play and the strategy you use. The three types of paintball guns are: electronic, mechanical, and pump action. Electronic guns are usually battery powered and used in the game of speedball. Mechanical guns are usually gas-powered with either CO2 or HPA. Pump action markers are slower and require you to pump the gun to get it to operate. Most commonly, paintball guns have a hopper to hold the ammo and release it into the chamber. Hoppers usually can hold 200 paintballs. The other common means of using ammo is through a magazine, which holds fewer rounds and requires more aim. Airsoft guns, like paintball guns, are designed to mimic live ammo guns, but instead of using bullets or paintballs, airsoft guns fire round plastic pellets. The airsoft guns are low-powered to ensure that the pellets will not do any serious damage when they hit an opponent. Airsoft guns are usually either mechanical or automatic. The mechanical guns use a coil spring-loaded piston air pump, known as a spring gun, to fire. The automatic guns are battery-powered and pneumatic, operating with either CO2 or HPA, much like a paintball gun. The guns also have a low muzzle energy rating that ensures that the pellets are not penetrating and safe for play.

Perhaps the biggest difference between airsoft vs paintball is the type of ammo used. Because the ammo is so different between the two sports, the rest of the gameplay is affected. You cannot play the game the same way, wear the same gear, or even use the same type of guns and accessories. Understanding the difference between the two may make the ultimate decision in which type of sport you choose to play. Paintball gets its name from the type of ammo that it uses. Paintball is played by firing balls of paint at your opponents on a battlefield. The balls themselves are gelatin that is filled with a water-soluble paint. The paintballs are .68 caliber as a standard, though there is the smaller .50 as well. Players still need to wear protective gear even though you are firing paint due to the speed that the balls are launched. The ammo is typically stored in a hopper, which can hold up to 200 paintballs and fire rapidly, or a magazine, which usually holds less than 20 balls. Airsoft ammo is nothing like paintball ammo. Airsoft uses plastic or resin pellets that are substantially smaller than a paintball. The standard pellet size is .20 grams and 6 mm in size. On average, an airsoft pellet travels about 330 feet per second with a maximum effective range of about 110 yards. Unlike paintball, airsoft pellets do not mark your opponents, requiring players to work off of the honor system in indicating that they have been hit. The speed that is allowed during gameplay varies from place to place and is often regulated by government entities for safety reasons.

When it comes down to it, getting hit by an airsoft pellet or a paintball is going to hurt, which is why all players must wear the proper protective clothing and gear at all times when around a loaded gun, regardless of whether you are in a battle or not. Because the ammo is different in the two sports, the question of how much it hurts getting hit by one type of ammo over another is naturally going to come up. But the question should not be which one hurts more than the other, because ultimately, they both can hurt.

Since both paintball and airsoft are shooting projectiles at you that travel about the same speed, you need to consider that the paintballs are bigger and heavier than an airsoft pellet, but as a result they get more drag in the air and may not sting as much as a pellet, though the welt they leave will be bigger. Most of the pain is going to be absorbed by the clothes and gear that you wear. Where you do not have natural padding, meaning muscle and fat, you are more likely to get bruised from being shot. This usually includes your arms, neck, and your ribs. How much it hurts will depend on how close the shooter was and the thickness of the clothes you are wearing.

The rules of paintball can vary depending on the type of game that you are playing. If you are playing speedball, the rules will not be the same as if you are playing woodsball. Speedball is a timed game that ends in minutes, where woodsball can last much longer. The maximum speed that you can shoot is set by where you are playing, but most will need to be under 300 feet per second and will be checked to make sure that you comply. You also have to wear your safety gear, including goggles, at all times. You also cannot bring in other types of weapons or gear to fight your opponents with, sticking strictly with the paintball gun. When you are hit, which includes your gun getting hit, you are eliminated from the game. The goal is usually to eliminate another team and either be the last team or player standing.

Airsoft generally has similar rules to paintball. You should wear your protective gear at all times, even when you are not actively playing, in the event that a shot is fired accidentally. Because airsoft guns look so realistic, you will need an orange tip on the gun that should not be removed for any reason. They can easily be mistaken for a live ammo gun. When you are hit, you are out of the game, but it is up to you to acknowledge that you have been hit and take yourself out. Airsoft is typically played with two teams fighting until one of the teams no longer has any active players still in the game. The speed of the guns is controlled as well with most venues restricting speeds to somewhere between 300 to 400 feet per second. Headshots should never be taken deliberately as it can be extremely painful.

In paintball, you are immediately marked when you or your gun is hit by a paintball. The color usually indicates who hit you and will not come off during the game. So you cannot hide the fact that you were hit in paintball. In airsoft, however, there are going to be no visible indication that you were actually hit in the gameplay. If you were not shot at close range, the shooter might not even be sure that you were hit. Because of this, airsoft works on an honour system and as not all players are honourable, cheating can sometimes happen. In this case, players might claim that the pellet did not hit them and stay in the game, even when they should have been eliminated. Cheating might seem like an easy way to stay in the game, but it takes the fun out of it for everyone.

The cost of airsoft vs paintball can be dramatic. Some airsoft guns can be purchased easily under $50, but the same cannot be said about a quality paintball. The pellets in airsoft are also substantially less costly than paintballs, allowing you to purchase a couple thousand pellets from under $10. Most paintball markers are also gas-powered and while some airsoft guns are as well, there are also the spring-action guns that do not use gas. The cost of gas can add up as well, especially if you use a gas-powered hopper in paintball. So when it comes down to it, airsoft is cheaper to play than paintball. When looking at the cost, however, you also need to take into account the differences in gameplay and the advantages that paintball can have as you become a more experienced player. If you are just starting out, however, airsoft is more bang for your buck.

In both airsoft and paintball, you can operate in a kind of mil-sim if that is what you choose to do. Depending on your gameplay, you can gear up and use a real-looking gun to make it seem like a real combat situation. Airsoft guns are more realistic looking than paintball guns and need an orange safety tip to ensure that they are known to not be live ammo guns. Airsoft enthusiasts say that the game is more realistic than paintball, but the more serious paintball players often make the same claim. Paintball does have more options as far as types of guns and add-ons go. Whether you want a more combat-like experience, complete with red dots, sniper barrels, and silencers, or something a little more high-powered with a hopper, you have the choice in paintball. Airsoft is more limited in its accessories and options which may mean that you do not have the ultimate experience you are looking for. You can still behave and strategize in a military fashion in either, but how far it goes is limited in airsoft. Then again, because of the ammo type and the gun, you can get a more realistic warfare experience with airsoft.