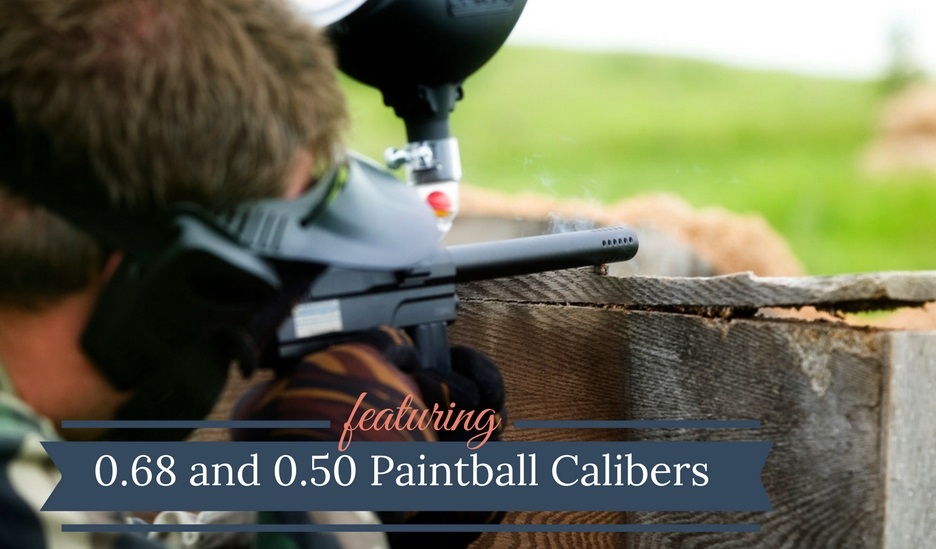 If you’re new to the sport of paintball, you may have some questions about which caliber of paintball to purchase.

If you already have a gun, your options are limited to the caliber that the gun is, as the various calibers aren’t interchangeable without the use of a conversion kit. But if you’re in the market for a new gun, knowing what caliber is best for you can help you narrow down which one to get. So if you’re deciding which to get, what it comes down to is how you intend on playing the game.

What Is A Paintball Caliber Anyway?

The caliber of the paintball is simply the size of it. There are many different sized paintballs with the most common being .68, followed by .50 caliber. These numbers represent the diameter of the paintball, with .68 being .68 of an inch, and .50 being a half inch. Other calibers include the .43 and the .62, though they aren’t commonly used. The caliber corresponds with the barrel size of your paintball gun/marker, meaning they must match or you won’t be able to fire the paintball. If you prefer to change calibers, most guns have conversion kits available that will allow you to change out which caliber paintball you’d like to use.

What Is The Difference Between The Calibers?

The smaller caliber paintballs are designed as lower impact variations of the industry standard of a .68 caliber. Because they are smaller, they don’t hurt as much when they strike an individual. Smaller paintballs are also recommended for indoor use, for beginners or children.

The .68 caliber is a larger paintball, which means it can travel farther so depending on how it is used, it can open up more types of games to play. Even if they hurt more than smaller sized calibers, if you are wearing the proper clothing and protective gear, most people will hardly be able to tell the difference between the sizes.

When to Use a .68 Caliber Paintball? The most commonly used paintball, the .68 caliber is considered to be the industry standard. Despite their size being heavier and larger which means fewer rounds can fit in the hopper, they remain popular because their velocity means they travel faster and farther. They also offer a satisfying impact, they almost always explode when they strike the target.

They can hurt more than a smaller caliber, so it is important to take this into consideration when determining how it will be used. If you’re going to be playing indoors, you may not need such a large caliber, and if the players are youngsters, a smaller caliber may be better for them.

When to Use a .50 Caliber Paintball?

The .50 caliber paintball is considered to be the low impact paintball. It travels at a slower speed, and shorter distances which make it less painful when it strikes a target. They are smaller than the .68 caliber, allowing more rounds to fit in the hopper. Less time spent reloading means more time playing. They are also popular in woodsball guns because they can be used in areas of thick underbrush, which can be problematic with larger rounds.

They are also more cost effective than standard paintballs, because both the guns that shoot them and the paintballs themselves typically cost less. Combined with the fact that they are require less air to shoot them, they are all around the best value.

Deciding Which Option Is Best For You

When you are weighing the pros and cons of which size paintball to use, consider how you will most often be using the paintball gun. If you usually play indoors or woodsball, it may not be necessary to invest in a larger caliber paintball gun, but if everyone you play ball with has a larger caliber, you want to make sure you’re armed for the game properly. If you prefer the benefits of both, look into a gun that is able to be converted from one to the other to allow you to customize if for the game you are playing.

It’s important to do you research before deciding on which option is best suited for you. If possible, rent a gun of the different calibers before investing in one to see which you like best. There are benefits to both, but you’ll know which one is the best option for you. Whatever the case, always wear the proper gear when playing and you’ll be sure to have a good time.