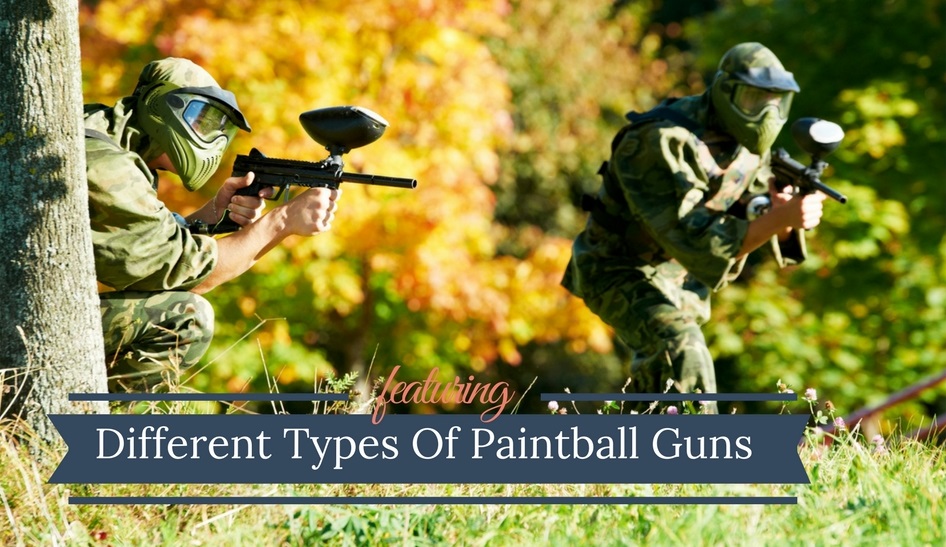 When it comes to paintball, having the right gun will make a big difference in your game, and can certainly affect your strategy. Learning the different types of paintball guns, and during what type of play you would use each one can help you become a more prepared and skilled player. Some players prefer one type over another, but learning the advantages and disadvantages of each will help you select the best one for you.

Each has different capabilities, and runs differently than the others. As technology advanced over time, paintball guns improved, and could still continue as time goes on. So how does that affect you? Read on to learn about the different types of paintball guns. The first type of paintball gun introduced to the market, the pump paintball gun is basic, and in modern times less common than the latter two types of paintball guns. Before each shot, you must pull the pump handled to seat the paintball. This prepares the shot and prepares your paintball gun for firing. Failure to do this before a shot means nothing will happen when you pull the trigger- giving your opponent an advantage against you. The paintball is propelled from the gun from aid of either CO2 or compressed air.

While they may not be as popular as they once were, pump paintball guns are one of the most reliable types of paintball guns. With fewer components, and a simple pump action to prepare the gun for a shot, they withstand the test of time. Some players prefer to keep it classic, and choose a trusty pump paintball gun as their weapon of choice. If you hit your target with a pump paintball gun, you can thank skill for that, rather than luck. Each shot is calculated, rather than a spray of markers that just so happened to hit someone like with semi-automatic models.

For those who are new to the sport, many people don’t recommend starting with a pump paintball gun. Because they require more skill, and aren’t as common, inexperienced players may be discouraged if all their opponents are using semiautomatic and mechanical versions. Practicing with a pump paintball gun before hitting the field is recommended both for new players and those transitioning from a semiautomatic or automatic model. When it comes to playing paintball recreationally, mechanical guns are by far the most common marker. They operate semi-automatically, which allows for quick and accurate shots. They fire one paintball per trigger pull, but don’t require a pump before each shot. This allows for rapid fire in the field. The most common type of mechanical paintball gun is the blowback. When the trigger is pulled on the blowback design, the sear catch releases the striker. The striker then opens the valve to the CO2 or Compressed Air which propels the paintball from the gun.

One of the major benefits of a mechanical semi-automatic paintball gun is its ease of use. There is only a small learning curve for them, making them the perfect solution for beginners. Along with their affordability and ease of maintenance, they are a popular model for players of all skill. They are also easy to use and widely customizable which also makes them so common and well received.

One thing to keep in mind is that they can go through propellant quickly, so it is important to make sure you can easily access CO2 or Compressed Air when a refill is necessary. Most commercial playing fields and pro shops should have the capability of refilling your tank. If you’re concerned about fuel efficiency, consider a stacktube design for your paintball gun, as they tend to be more efficient. On the other hand, if you’re interested in upgrading, inline models are the way to go.

Electronic paintball guns are the cream of the crop when it comes to paintball guns. Rather than the trigger manually setting off a chain of actions that open the valve, like in a mechanical version, it engages an electrical circuit that controls the valve. It is a much quicker and smoother trigger pull than mechanical versions, which gives users a high level of control.

The major benefit of using an electronic version is that it gives you firing mode options when it comes to how you’d like to shoot. Electronic paintball guns can be used in burst, full auto, and ramping just based on how the gun is set and how the trigger is pulled. This makes them excellent for quick fire and fast moving games. One of the most popular benefits is the capability of 3-shot burst, which deploys 3 paintballs per trigger pull. They’re also easy to use and maintain, and require a battery to run the firing mechanism. The paintballs are still propelled from the gun by use of CO2 or compressed air.

While electronic paintball guns offer many advantages and are one of the best paintball guns on the market, they are typically more expensive than a mechanical gun, which is the main reason they aren’t as common. They have become more affordable in recent years, so as technology advances, the likelihood of the prices becoming more comparable increases.

When to Use Each Type of Gun

There are many different ways to play paintball, and there are advantages of each type of gun in each scenario. Knowing what type of gun to use for each scenario will best prepare you for a fun game of paintball. When in doubt, a mechanical semi-automatic is probably the most common, which would put you on par with other players. The electronic version may be the most versatile, but isn’t always appropriate in all settings. And pump guns are most reliable in adverse weather conditions, and are excellent for honing in your skills.

There are many different types of games, which are constantly evolving. Different teams have house rules, and some platoons may choose to only allow a specific type of paintball gun. Some of the most popular games of paintball are Woodsball, Speedball, and Scenario, with Mill Simulations growing in popularity.

Scenario paintball is a highly customizable variation of paintball, where players create a scenario complete with a storyline. Some commercial paintball fields offer a variety of fields to best fit your scenario. The benefit of creating your own scenario is that you set the ground rules, so this can be a good way to get all players to use the same kind of gun to rule out advantages from different types of gun. Many people use pump guns during scenarios as they rely more on skill, rather than rapid fire. Scenarios vary depending on the location

If speedball is the name of your game, then it should come as no surprise that pump paintball guns aren’t your best friend. One of the most common and traditional variations of the game, many professional leagues play this variation. Speedball typically takes place in a dedicated field with manmade hazards, bunkers, and other objects that players can use to shield themselves from the opponent. Speedball is a fast version of the game, where the team with the last person standing is the winner- so this is the time to bring out the big guns such as the electronic and mechanical paintball guns that can shoot semi automatically or fully. This isn’t the time to take practice accuracy with a pump gun, because while you’re doing that, chances are someone will focus on you and strike.

Military simulation can be played indoors and outdoors, and can combine any of the other different types of paintball. Much like its name would imply, those who are playing military simulation often re-enact war games, and have two teams opposing one another, much like an actual military situation. Depending on the era players are re-enacting can determine which paintball gun to use. Those who are playing Civil War MilSim would not use a semiautomatic, and are more likely to use a pump paintball gun to best recreate the era. There are many variations to MilSim paintball, each best for a different type of gun.

Woodsball is a variation of paintball that, as its name implies, takes place in the woods rather than a dedicated paintball course. Natural parts of the landscape are used for cover and for hiding. There are many different games that you can play there, so depending on your flavor, there can be advantages of each different type of paintball gun. Different roles on teams may choose to play with different woodsball guns, or with different customizations. Depending on your skill set, and the skills of other team members and players, you can use any type of gun to play in woodsball.