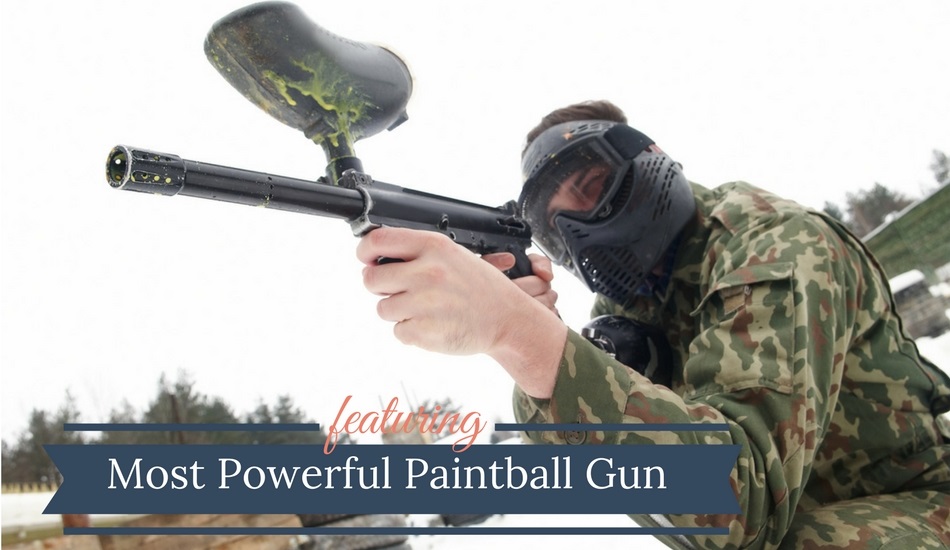 ​Regardless if you are a beginner or a seasoned veteran out there on the field, you might want to familiarize yourself with the most powerful paintball guns. Either way, even if you aren't as accurate as you might want to be, the power behind a shot can pack a punch that the lack of accuracy might make up for.

What Is a Paintball Gun FPS

For the basics, you should know, that the velocity of the shot of a paintball gun can be measured in feet per second, which is abbreviated as fps. For one of the most powerful paintball gun fps, you will need to compare a few of these guns that we’re going to lay out for you here on this guide.

How Fast Does a Paintball Gun Shoot

For a general, common paintball marker, there are various details and tests that each paintball gun will go through to deem it acceptable for people like you who are playing on the field. On average, a paintball marker can shoot up to 300 fps. However, when it comes to paintball fields, you normally will see a maximum of 280 fps.

When you are measuring how fast a paintball gun can shoot, there is a chronograph test that measures the speed of the paintball gun’s shot. The test is a simple one, that can easily be adjusted on your marker before you begin playing.

The First Strike T15 Paintball black marker and rifle is a two-piece cast aluminum construction and an aluminum quad rail handguard. The 2 pin quick disassemble is a great component of the design that can be a perfect attribute to have while on the field and need to do a quick change or to reload during rapid action and under pressure.

The magazine and hopper feed of the First Strike Paintball marker is a particular component of what makes it a powerful design. The tank holds 13ci and offers a true .68 caliber 1 to 1 AR platform. The marker is equipped to use a continuous feed magazine or a standard hopper. It also features a stock combo.

It is a very accurate marker that reaches a high range and can shoot far into the distance. Since it has the magnified scope, it makes each shot much more accurate and possible to hit the mark with less chance of missing.

The Dye DAM Assault Matrix Paintball Marker has not only a variety of styles to choose from with various colors and other camouflage patterns but also has a variety of different features that can set this design apart from the others. The Dye Paintball Marker comes with a compression formed hard case, two additional magazines with rounds of ten, and a repair kit.

The firepower of the Dye Paintball Marker is backed by a semi-auto style, a three round burst, and full auto firing modes. The paintball marker also has a quick release bolt system with a built-in Hyper regulator. The clamping feedback and the competition-style trigger frame also helps provide the marker with a high amount of firepower.

Boasting its modular rail system, the DYE Assault paintball marker posts a one shot, one kill theme. You can also add a DYE icon Rapid Acquisition Sight to help your accuracy and precise marksmanship. This marker is a great choice for short range engagement. You can also seamlessly switch between the magazine and the hopper feed, which is helpful when you're out on the field.

The response trigger and Tippmann Cyclone Feed System also benefits the firepower system. The gun has a Black 200rd Hopper, 3Skull 6+1 Harness, and can accept an electronic trigger kit. The firepower of the Tippmann U.S. Army Alpha Elite Paintball Marker Gun is not only a powerful paintball gun, it also has a lot of firepower.

Amazing gun for accuracy and also comes with a lot of different accessories and parts of the gun that help establish accuracy. The barrel of the gun also helps with accuracy.

​The Wrek Paintball Project Salvo is designed to resemble a live ammo rifle. It comes with a J&J performance 16” ceramic barrel that will reduce the amount of friction within the barrel when it is fired. It is a little heavy, coming in at 6 pounds.

​The fire power on this rifle is improved because of the ceramic barrel. It gives virtually no friction inside of the barrel, giving you a smooth shot with very little noise. The velocity on this rifle is between 250 to 300fps, with an effective range of 200 feet. It can work with either CO2 or HPA, so you can choose the form of power that you would prefer.

​The Tippmann TMC is designed so that it can work with either a magazine or a hopper. The mag can hold 19 paintballs, which is plenty if you are being more careful with where you are shooting. It has a hopper feed neck, but it does not come with the hopper itself. Really, the marker can be fully accessorized to make it as custom as possible. The design also comes with a 12” high performance barrel with muzzle break.

​Looking at the TMC’s fire power, it comes with an easy-pull trigger, which will allow you to effectively reach 150 feet as it is. Its velocity is about 250fps, but it can reach over 300fps if the conditions are right, allowing it to be as tactical as you need it to be.

​The accuracy is decent on this gun, but if you add on customized optics, you can improve your range from 150 feet up to over 300 feet, allowing you to use the gun as a sniper if you would like to. To find the most powerful paintball gun, you can read this guide to help you know the ins and outs of purchasing the perfect marker for you. You should lay out the various characteristics and features of the importance of each type of paintball gun. Taking you through a few of the top paintball guns for being high in the powerful feature, we hope that this can help you decide on which gun to choose from.