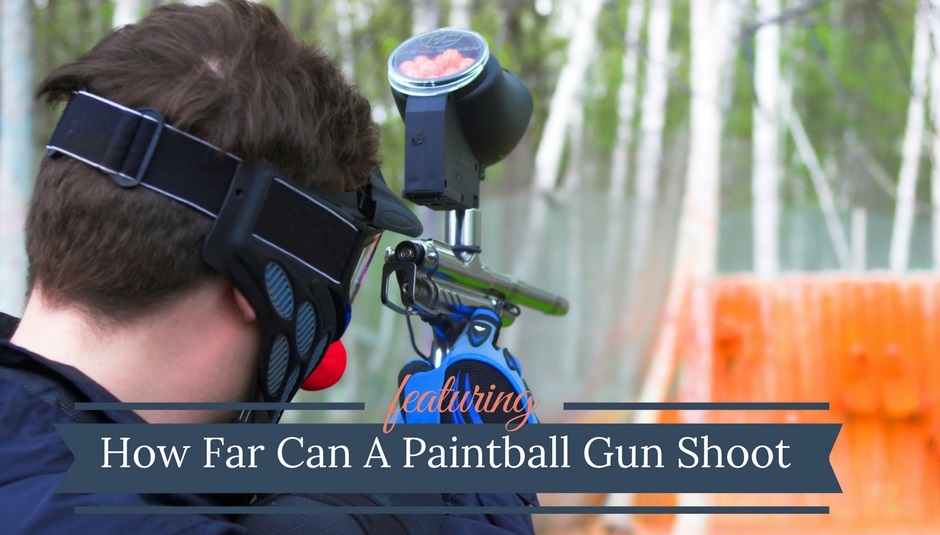 If you are on the lookout for a paintball gun and are wanting to invest in one, there are a few attributes you should be aware of when you are comparing features and prices. One of the most important feature is not just the accuracy but the total distance of how far a paintball gun can shoot.

If you are looking to start on the paintball field and you need to invest in a paintball gun, you might want to familiarize yourself with the maximum distances and specific facts to look out for when purchasing a paintball marker. These can mean the difference between getting a gun that is effective enough but also meets your budget.

To help you choose which paintball gun you need or want, you will want to know the basics of how a paintball gun works and what it takes for it to shoot far.

When it comes to distance, there are three different basic ranges that a paintball gun can shoot.

The careful balance between being hard enough to make it through the barrel of the gun to actually breaking when it finds its mark. The science behind this when it comes to constructing the shot of the gun is that you have to factor in the speed of the gun. If you are shooting at targets far out of your effective range, the paintball won’t be effective when it hits — not breaking even upon impact. This effective range is usually found from 80 to 100 feet.

This term is translated in a literal way. It is the range in which the speed is controlled so that paintball guns can shoot in a safe way. If these paintballs are shot at too high of a velocity, it can be dangerous to your opponents.

If you are playing on a registered field and center, they usually will have a limit of speed for the velocity of the shot of your paintball marker. The cap of the rate is usually around 280 feet per second. In miles per hour, it is 200 mph.

If you want to skip over all the details of these facts, you can simply focus on the absolute range of the paintball marker. This range is the full distance of how far the paintball gun can reach.

Most, if not, all paintball marker have a maximum FPS, which is frames per second. This is the limit of how far and powerful that a marker can shoot. From gun to gun, the absolute range will differ, and some guns can even shoot up to 150 yards.

If you have a paintball marker and are looking to increase the distance of your shot, there are only generally two things that you can do to change. You can either change the rotation of the ball or change the shape of the ball itself.

In your paintball marker, you can put grooves in the barrel which forces the bullet to spin. However, you have to be careful with the type and depth of the grooves made because it can actually break the barrel of the marker. The idea behind increasing these grooves is that it can give the paintball a backspin, which increases the distance.

By changing the shape of the paintball into more of a bullet than of a ball, it directs it longer and further. Adding fins to the bullet and making the nose of the bullet more brittle will ensure break upon impact. You can make sure that the paintball will have more durable sides so the barrel won’t break upon shooting the paintballs.

However, if you were to try and complete this second version of change, you will have to feed your gun in the proper direction, which also means that you might need magazines that feed the rounds into the gun. If you are going this route, the price of this second alteration can also be costly.