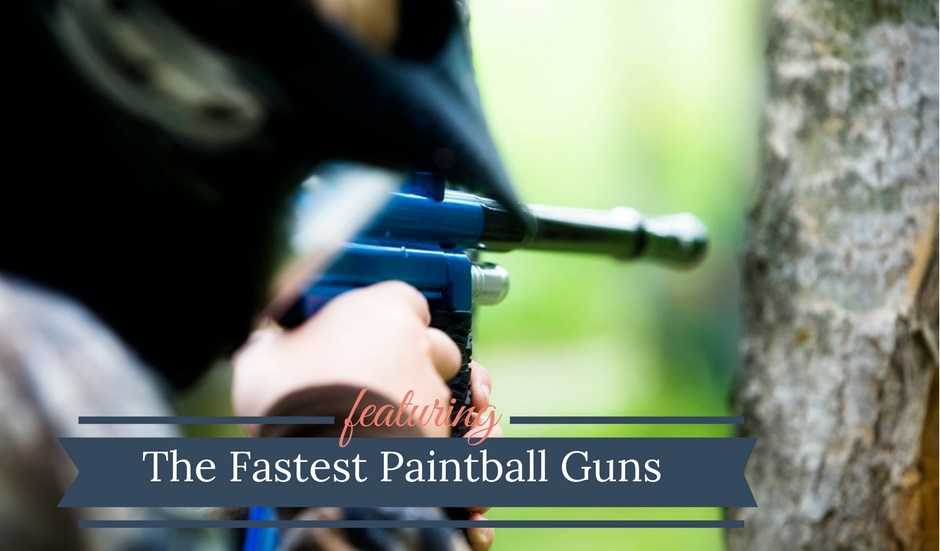 When you're playing paintball, you as a player will need to have many attributes — skill, patience, endurance, and accuracy, just to name a few. Not only do these need to be characteristics that you have to help you win, you also need to have a paintball gun with all of these qualities. One of the most important attributes is: speed.

Regardless if you are serious or looking to smoke all your friends when you play at an amateur level, having the fastest paintball gun will definitely give you the edge you're looking for. Having the fastest paintball gun bps can give you the difference that can help you be a better player. Even at the beginner’s level, having a proper gun with speed will help your gain and is easy enough to use. This guide will lay out the research you need to know before you go out to purchase your new paintball gun.

How Many Paintballs Can A Paintball Gun Shoot Per Second

Depending on which type of paintball gun you have, whether it is mechanically or hopper-fed, will have a major impact on the speed. The direct speed of firing can be limited to how quickly the paintballs can be loaded into the paintball gun,

Of course, one of the most important factors that can dictate a paintball gun’s speed, is how fast you are at the trigger. Bottom line is: despite the fact that your gun might be the fastest shooting paintball gun if your fingers aren't moving fast enough, your investment really won’t matter.

How Fast Does A Paintball Travel (FPS) Normally, speed is measured in miles per hour or kilometers per hour, depending on where you live. However, since paintball isn't created to travel kilometers or miles, you need to recognize the difference and usage of speed here. Covering a short distance at a fast speed is just as important as any other skill you may have. Measuring that speed is equally as important when choosing which marker to purchase.

Paintball speed is normally measured in FPS, feet per second, instead of MPH, miles per hour, it might be a bit more difficult to be able to differentiate solely based on numbers to get a mental idea of how fast your marker is. On average, a paintball travels about 280 FPS. In MPH, it’s about 190, which is probably (and hopefully) faster than you have ever traveled in your car.

Although it is fast, in general, the shot of a paintball is much, much slower than the speed of a shot of a normal gun. When we’re talking about an effective range of 80 to 100 feet, the paintball can reach its target in one-third of a second.

Knowing the speed of your paintball gun is not just important for adjusting your game and purchasing your product but also might be essential to be able to play. Some fields may have a speed limit.

When you are getting into the world of paintball, you might come across some unfamiliar terms. If you are looking to get the highest quality or fastest paintball gun, you will need to familiarize yourself with some important terms.

Ramping and Automatic Firing are very important when it comes to the speed of paintball. Shot ramping is when there is a little bit more technical additions to your paintball gun rather than purely manual firing. It will allow the paintball gun to be able to fire more than once per trigger pull which is also caused by automatic firing.

The Dye M2 Paintball Marker has a one-inch OLED interface with a Method Operating System. The design also has a wireless connection that binds an impulse between the frame and the body. With internal pressure sensors, a USB rechargeable battery, and a 5-way control joystick, the Dye Marker’s design sets it apart from most other paintball marker’s on the market and is one of the reasons why it is the Editor’s top choice as the fastest paintball gun.

The paintball marker has a great quality of accuracy with its precision honed 2-piece paintball barrel and trademarked DYE sticky grips that can help with nailing your target.

The Planet Eclipse ETEK5 Paintball Marker has an internal LPR and inline OOPS which is combined with an SL4 Inline Regulator and a larger valve chamber than usual. The marker also has a contoured dual-density grip and console that assist with handling while playing in your game. Being able to focus on all the other aspects of the game, you don't have to worry about losing grip on your marker while you're running around, jumping, diving, and sliding into place.

When it comes to the firepower and accuracy of the ETEK5, the larger valve chamber is combined with a valve that has a high amount of flow. When the new, soft-tip Cure5 bolt gives off an HPR operating pressure of 150psi and an LPR pressure of 85 psi, the shot is not only more powerful and more accurate but also quieter and smoother.

The Dye Proto Rize MaXXed Paintball marker is available in fourteen different colors and designs, which really goes the extra mile in making available a marker fit for any style. Not only does this marker vary in design, it also varies in firing modes, with four tournament modes available, which come along with its patented UL hourglass grip frame. The Dye Proto Rize MaXXed marker has a lockdown adjustable clamping feed neck and patented bolt spool valve technology. The marker also has an eye for safety, with a UL airport on/off switch.

With a fourteen-inch, two-piece precision honed barrel, the marker has a knack for accuracy. The longer the barrel, the better the accuracy— which means this marker definitely will meet its target. It also comes with slick lube and a barrel sock so that you have all you need to take care of that barrel.

When deciding on your purchase pertaining to the fastest paintball gun, you have plenty of options out there for you. If speed is one of the most important qualities that will factor in on your choice, it might be a bit of an easier decision for you. However, normally, when you're deciding to invest in a paintball marker, you will probably want to take in the quality of several aspects of a paintball marker. Taking the perfect combination of what you deem is important in your game can make or break your decision.

With speed, you need to factor in your own speed along with the gun’s FPS. The paintball hitting your target accurately can depend more on how fast you can pull the trigger than on the speed behind the marker. Therefore, get a gun that also tailors to your playing style. Depending on what level paintball player you are, you might make a decision simply based on your skill, as well. However, if you are choosing a paintball marker based on speed, we hope that this guide has helped you.