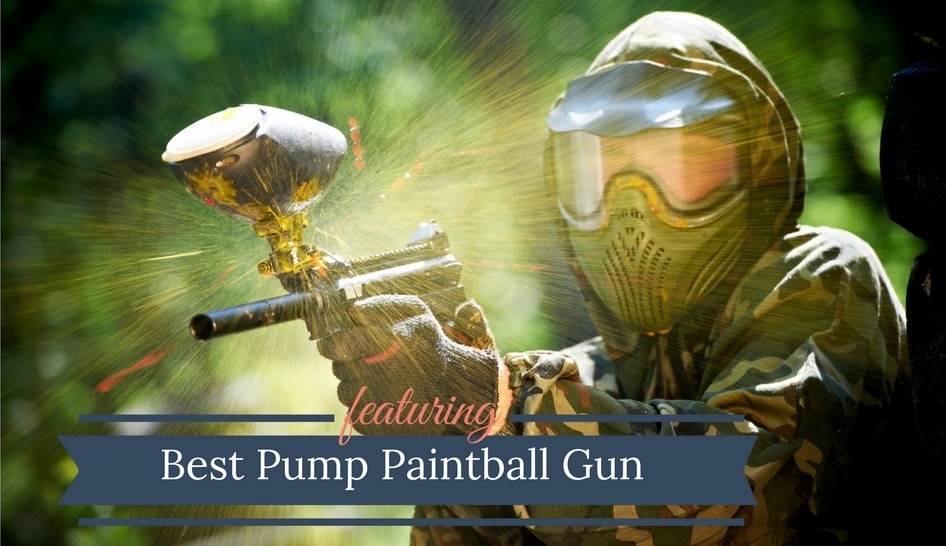 While their original use was to mark cattle and trees from a distance, they have evolved over time to give you a different form of battlefield gameplay. If you are considering moving toward a pump paintball marker, you will need to get the best pump paintball gun available.

How Does a Pump Paintball Gun Work? Since pump paintball guns operate differently than mechanical or speedball guns, you should understand how they work before you decide that you should own one.

Pump paintball guns are single fire, meaning you will have to work the pump between each shot since there is not an internal mechanism that will reset the bolt for you after a paintball has been fired, much like a pump action shotgun.

Some pump action markers have no air tank, but the best pump paintball guns will still use CO2 or HPA. When you pump the gun, it will pull air from the tank into the reservoir, which is released when you pull the trigger. One shot usually equals one kill with a pump gun due to the need to be accurate with your shots.

Pump action paintball guns are not as popular as mechanical or electronic markers because they only allow one paintball to be shot at a time. Regardless of the extra effort needed to fire a pump paintball gun, they are still a preferred choice by many paintball enthusiasts. Some players claim that they are more accurate than other markers, but there really is not any special mechanism inside of them that would make that true.

Realistically, pump action users are more accurate because they have pay more attention to aim as each shot is precious. They will up the skills needed on the battlefield as well and are preferred by enthusiasts for that reason. Your gameplay will improve overall with a pump action gun because you will have to pay more attention to the detail and accuracy of your shot.

The Azodin KP3.5 Kaos is a 14-inch two-piece barrel with two backs and a half-block design. Like the KP3, the KP3.5 comes with the Delrin pump handles as well as dual pumping rods and a clamping feedneck.

The Delrin pumps are nice because they do not require greasing, but if they are greased, they could swell and need to be replaced at a later time.

It has an AC barrel thread rather than an A5 barrel thread. The KP3.5 is meant to be lightweight and simple to use, coming assembled to take any guesswork out of it. That is part of the reason that the KP3.5 is one of the best pump paintball guns for beginners or enthusiasts who would like to move from a mechanical or electronic marker to a pump marker.

The KP3.5 comes with both a .685 and a .681 barrel back. It operates with 230 psi of pressure. It runs on compressed air rather than CO2, just like the KP3. The Acoustic Bolt lowers the operating pressure which makes it both quiet and more accurate.

The KP 2011 is made with an aluminum grip frame, as well as an interchangeable barrel thread with an autococker. Overall it has an old school or classic pump paintball gun design, but does come with all of the upgrades and advancements of the new pump designs. The KP 2011 also has a low pressure inline regulator which comes with standard ASA threads.

It also has a Twist Lock II design that results in an easier, quicker, and tighter overall design, making it easy to lock the hopper quickly and securely.

The design is meant to be durable as well with its stainless steel pump rod. The barrel is a .689 and 12 inches long. The KP 2011 is the best pump paintball gun for the price. The KP 2011 weighs 2.7 pounds, is 18.29 inches long in totally length, and is 8.88 inches high. It really is the best pump paintball marker for the price and a good choice for beginners.

The KP 2011 uses compressed air as opposed to CO2 and is also extremely quiet to use. It comes with a high performance valve, muffle striker, and silence bolt all to keep your sound signature to the bare minimum, allowing you to keep your exact location difficult to track on the battlefield.

The Azodin KP3 Kaos is a different design than the KP 2011 Kaos, though it does have some of the same features. With the aluminum body and aluminum single trigger frame, the KP3 is a durable pump paintball gun. It comes with dual cocking rods for smoother pup stroke, a quick release bolt, and an aluminum clamping feedneck.

It is designed with dual pump arms, half block body, dual ball detents, and a low pressure operation, all of which are usually found in the higher-end pump paintball guns, but the KP3 has at a budget-friendly price.

The pump is accurate, coming with .685 and .681 barrel backs. The KP3 operates on 230 psi, which is low, especially for a less expensive marker. The marker cannot use CO2, which may mean that you do not get as much fire power abilities as with other markers, though the compressed air does still back a punch.

This tournament-level pump paintball gun comes with an aluminum 2-piece 14-inch barrel. The Empire has a vertical feed design as well as a removable vertical pump assist plat, and a Delrin pump handle and sled. It is made with a standard 45 frame that has a molded wrap-around grip with ergonomic finger grooves. It also comes with dual stainless steel pump rods to increase the gun’s stability and has a T-mounted On/Off ASA with bleed.

The Empire is an excellent way to develop your paintball skills and conserve your paintballs. The design is meant to be durable as well and operate smoothly on the battlefield, while still giving you the one shot, one kill that you would hope to get out of a pump paintball gun.

The Empire Sniper fun uses HPA instead of CO2 to reduce the coast while improving the pump action’s performance. With its inline regulator and swivel adapter, the Empire provides the most efficient fire power. The Empire also has a 300 psi gauge that can be placed on either side. It does still pack a punch, which may surprise your opponents on the field. New Ultimate Guide To Choosing The Top Paintball Marker For Your Level Of Play
https://extremesportsland.com/paintball/guns/best-paintball-gun/

Beyond the cost, pump markers require more accuracy as you have to pump after each round. This means that your skills in battle will have to improve in order to use one effectively, improving your overall ability. Because you can only use one paintball at a time, you will go through substantially fewer paintballs than you would with a semiautomatic marker, saving you in the long run.

They are also less likely to break balls as only one ball is in the chamber at a time. This will reduce the cost of paintballs for you as well. The pump paintball gun is also more user-friendly for beginners as they are simpler to operate.

Ultimately, having a pump paintball marker can really change how you play paintball. The goal is one shot, one kill, requiring more skill and accuracy in your gameplay. It is a strategic weapon that will improve how you play the more you practice.

When you are aiming to purchase your first pump marker, you will want to go with the best pump paintball marker possible. If adding one is not in your budget, you can go with one of the more budget-friendly markers, but even the higher-end pump markers are less expensive than the mechanical or electronic markers.

The Empire Sniper is our choice for a pump marker as it has all of the features that you would need from a pump action gun, as well as the ability to customize it to suit your needs. The Azodin brand has several markers that are more budget-friendly if the Sniper is too much, but the Sniper is still the better option.