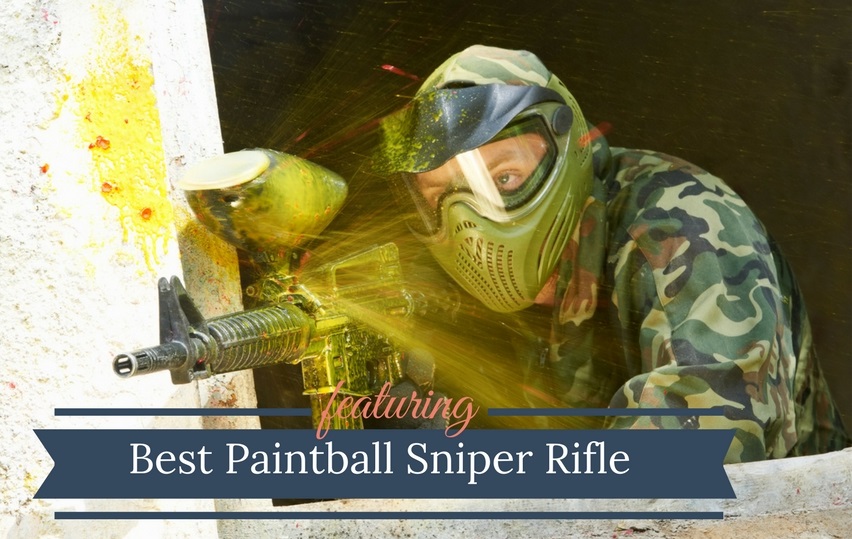 Sniper paintball guns are often considered marksmen of the highest caliber, requiring both skill, accuracy, and stealth to take out an opponent. This is true in both military battle and in paintball battle, taking out opponents without detection and at a long distance.

But skill makes up for only a portion of what it takes to be a good sniper.

What Features Should a Paintball Sniper Rifle Have?

Before we look at what the best guns are, you need to know what features sniper paintball guns need. To begin with, a good sniper paintball rifle is going to have all of the modes and upgrades that you can get. These include options for scopes or red dots, an integrated rail system to allow customization, and a reliable stock to keep the rifle positioned and stable to ensure accuracy.

A reliable sniper rifle will also have an easy-to-pull trigger to allow you to shoot quickly when you get your target in sight. Also, sniper paintball rifles should allow for you to swap out barrels, adjust the stock, and assemble relatively simply to keep you moving during battle.

The range is also essential as a solid sniper rifle will take out its target at a long range. You are not likely to carry more than one rifle during a battle, so your sniper rifle needs to be versatile enough to handle all combat situations.

What Is the Effective Range of Paintball Sniper Rifle Guns? Since a sniper is successful at hitting targets from a long distance, a sniper paintball gun will need to have the ability to shoot at a long distance. It is important to remember, however, that the goal of a sniper is not always to eliminate players, but can be an effective method of moving opponents to a different area on the battlefield. Regardless, even if your goal was not to hit a target exactly, you will need to be accurate. A reliable sniper paintball gun will keep the ball intact when fired but still allow it to break when it hits its target.

The effective range on a standard paintball gun can be anywhere from 100 to 150 yards. The reason behind this is that due to the standard velocity, someone could get hurt if a weapon is fired at a higher velocity. Since the size of a paintball does not stray from the standard .68 caliber, you are going to have a similar range in most rifles, except sniper rifles. Sniper rifles can give you up to an extra 100 yards of range, depending on the weapon because of how the paintball is spun and fired out of the rifle.

With all-aluminum die cast receiver and shock absorbing cap, the Tippman A5 Sniper Paintball Rifle is our runner-up for the best sniper paintball gun that you can get. The multi-position collapsible stock will help keep your arm steady as you aim at a long distance in order to reach your target.

Weighing in at 3.5 pounds, the A5 is lightweight, making it easy to carry during battle. With a no tool strip feature, you can keep the weapon going even during battle.

It is designed to be easy to assemble in 60 seconds or less as well. The stock barrel is a little more than 8 inches and is A5 threaded. The Tippmann Flatline barrel that it comes with will curve paintballs in order to increase distance without increasing the psi.

The Tippmann A5 is designed with quick-firing Patented Cyclone Feed System that can give you a maximum feed rate of 17 balls per second. The range on the Tippman A5 is 150 feet, making it the higher end of a standard paintball rifle.

With its upgraded high performance barrel and its all-metal bipod, the Wrek Project Salvo is our choice for the best sniper paintball rifle that you can get. The Project Salve also comes with a large red dot sight that is made specifically to be able to see targets when you are wearing your paintball mask, ensuring that you don’t miss a shot based on how you can view things through a mask.

This is especially important as a mask is necessary in any game of paintball. While you could change the red dot to a scope, the hopper would most likely get in the way. The Project Salvo is made with a long, 16-inch J&J ceramic barrel, using the standard .68 caliber paintballs. The barrel is an upgrade from the standard stock barrel as well as an all-metal bipod with extendable legs to keep your shooting platform stable.

The red dot sight that comes with the Project Salvo will improve your accuracy, giving you a better view of your target. The rifle also has an ultra-slick inner surface to improve both accuracy and efficiency. The velocity of the Project Salvo is also adjustable, allowing you to change if from 250 to 300 fps as you need. Allowing either CO2 or HPA, the Project Salvo ensures that you are going to be able to use the power of your choice.

Designed to mimic an AR15, the Tippmann’s Project Salvo is the best budget-option sniper paintball gun on the market. It comes with an all-aluminum die cast receiver with an 11 inches Quick Thread barrel.

The AR-style also gives it a collapsible and folding stock, a stainless steel gas line giving you extra reliability on the field. This Project Salvo also comes with Picatinny rails to allow you to add on any features or upgrades to improve the overall design of the weapon.

While the rifle does not come with all of the upgrades that you can get, the rifle itself is easily upgradable, allowing you to make it exactly what you need it to be depending on how much you are willing to spend on upgrades and attachments.

​For What Type of Paintball You Should Use a Sniper Rifle Now that we have looked at what the best paintball sniper rifles on the market are, let’s look at when you would want to use a sniper rifle. Whether you would want one depends not just on your strategy, but also your ability and skill. Naturally, a sniper rifle does not work in speedball, but is a good fit for woodsball.

Since woodsball requires its players to know how to be stealthy and work with your natural environment, a sniper rifle can be an asset for some woodsball players. Since sniper rifles allow you to customize your weapon, you can adjust sights or scopes as you would think you would best use them in woodsball.

When it comes down to what sniper paintball rifle that you would like to buy, you have to take into consideration how often you are going to use it. If you are not an experienced player and are just getting started, you could get by with our budget option of the Tippmann Project Salvo.

If you are planning on playing a game often, you will need a rifle that is capable of more, including having better range as well as the best red dot scope available. In that case, the Wrek Project Salvo is the best sniper paintball rifle that you can buy.