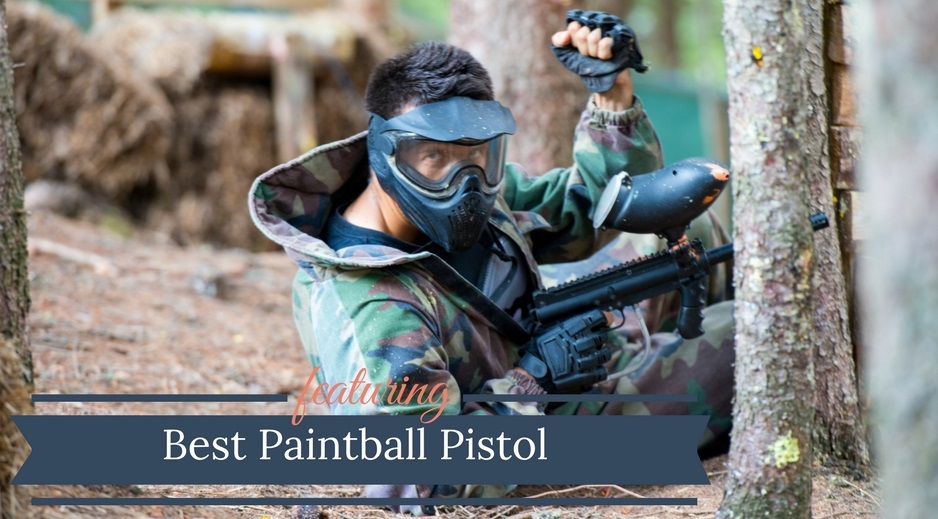 Paintball rifles are the standard in any paintball battle, but they might not be enough when it comes to being engaged in the field. Having a paintball pistol on hand can change the game for you and increase your options, especially if you need to switch out your rifle if something goes wrong.

Why You Should Carry a Paintball Pistol While Playing

What to Consider While Choosing a Paintball Pistol

When it comes to deciding what the best paintball pistol is, you will have to take several factors into consideration.

The Tippmann TiPX is a military-style paintball pistol with a compact and lightweight design. The TiPX is meant to act as either a solo or backup sidearm. It comes with a clear ammo window so you can easily see how many balls are left in your magazine. It is a standard .68 caliber pistol. The design is also ergonomic, making it easy to keep a hold of on the battlefield. The TiPX is a newer design than the TPX, but they do share a lot of the same features. The TiPX is reported to have the CO2 drain concern corrected from the TPX, but the new TPX also has had that corrected. The TPX and the TiPX really have a lot of the same design features, with the biggest difference being in the magazine design.

The trigger lets you puncture the CO2 on the first pull, making for a quick shot. The magazines hold 7 balls. It also has an efficient spool valve system that allows you to maximize the air efficiency while you minimize any kick. The firepower of the TiPX is comparable to the TPX. The TiPX also has an External Velocity Adjuster, making it easy to adjust with an Alan wrench. It's a great secondary weapon for woodsball and scenario paintball games.

​The Tippmann TPX has a metal trigger, a self-locking 7-ball magazine clip, and the ability to add a remote line. The design is ergonomic, making it easy to hold onto and steady. The barrel is removable as well. The TPX also has a Tru-Feed Straight Stack Magazine which guarantees a straight feed and is less affected by the weather. The design is meant to mimic a regular handgun. Its reliability is a big reason why it is our pick for the best paintball pistol you can get.

The trigger punctures the CO2 on the first pull, allowing for a quick shot. The TPX also has a quick release magazine feed system, allowing you to change magazines quickly. It also has an External Velocity Adjuster, meaning you can adjust the pistol easily with an Alan wrench. It is a standard .68 caliber pistol and works with the standard paintballs.

​The Kingman is the least expensive of the paintball pistol markers and the most budget-friendly of the best paintball pistols. The marker has a Reverse Striker Valve (RSV), so the CO2 will be released upon firing. The KT is meant to resemble a regular handgun, even with a simulated cocking action. The KT also has a safety barrel blocking device for added safety. It is compact, making it ideal for concealing on the battlefield and improving the element of surprise. The KT weights 2.4 lbs, making it one of the heavier pistols. Made of an all-aluminum construction, the KT also is a high impact polymer with aluminum receiver and a durable anodized fine matte finish.

​The Kingman can shoot up to 250 feet per second. The pistol uses .43 caliber paintball. One 12 gram CO2 cartridge will last for 70 to 80 paintballs, making it air efficient. The RSV allows for increased accuracy and distance. The accuracy range is up to 60 feet with an effective range of up to 120 feet. The KT also has a high visibility rating on hard sights. The velocity range is up to 250 feet per second.

The T4E is designed to resemble a regular firearm and acts as a replica with the same feel as a real Walther P99. The only obvious difference between the two when looking at them is the CO2 tube that comes out of the paintball replica. The barrel is larger than most pistols that use the .43 caliber, but that is because it is meant to look like a real firearm.

The trigger itself is heavy, keeping you from accidentally firing when the safety is off. The P99 is a little heavier than other pistols of a similar design and the magazines weigh it down more. Even loading it and unloading it acts just like a real firearm. Because the gun looks identical to a standard firearm, you will need to be cautious about carrying it outside of the battlefield.

The P99 fires using CO2 with a velocity of 355 fps. It has an 8-shot capacity and uses .43 caliber paintballs, but the P99 also has the ability to use rubber balls as well. The P99 has a little bit of a recoil. The gas is efficient, getting about 100 shots. It is pretty accurate. The safety on it has been reported to engage on its own during play so it is something that you will have to watch during a battle.

The Tiberius First Strike T8.1 is 10.5 inches long and 6.75 inches high with a 7 inch barrel. The total weight of it is 2.15 pounds, making it one of the lighter paintball pistols that you can get. The T8.1 uses the standard .68 caliber paintball size. The T8.1 has an easy assembly, making it simple to clean and to maintain.

With its compact design, the T8.1 is high performing. The magazine feeds right into the handle, behaving like a real gun. The T8.1 also comes with an undermount tac rail, side dovetailed iron sights, and dual rubber detents. There is also optional remote air adapter that can connect directly to the marker. Even though it is CO2 powered, you can adapt it to use HPA as well.

The T8.1 has a trigger pull length of .4 inches and a trigger pull weight of 2 pounds. The velocity of the T8.1 is up to 280 fps, but you will not want it to be any faster than that. The T8.1 runs off of CO2 as well, adding in a little extra fire power. The CO2 is meant to auto-seal when the magazine releases. The T8.1 is very accurate as well with full adjustable velocity.

Uses Of A Paintball Pistol And Basic Use

Depending on the type of paintball game that you are playing, a pistol can have a variety of roles. In speedball, for example, pistols are not used typically as you can only carry one weapon with you and pistols do not have the fire power needed to achieve the best success during a tournament.

A pistol would be a big disadvantage in speedball, but in woodsball it can act as an advantage. While most players are not going to select a pistol as their primary weapon, carrying a pistol as a backup can save you during battle. Acting as a backup marker, a paintball pistol can keep you in the game if your primary weapon fails.

Some players prefer to use a pistol as their primary weapons, however, due to their lightweight and compact size. A pistol can also give a player the element of surprise, allowing a player to pull it out with a less dominant hand while an opponent may have been focused on the primary weapon, though some fields do not allow players to use sidearms as they can be perceived as unsportsmanlike.

Regardless, if you play at a field that would allow you to carry a second weapon, a pistol can be an asset to your strategy.

Ultimately, you need to buy the best paintball pistol for your needs. Realistically, having a paintball pistol that can hold the same caliber of paintballs as your paintball rifle may not matter if the magazines are preloaded, but being able to customize the pistol to meet your needs is important. Even if the pistol is only your backup weapon, you still need to be able to pull it out and use it quickly when you need to.

Both the TPX and the TiPX have the ability to break the CO2 cartridge when you pull the trigger means that you will be able to fire right when you need to. A pistol is a great addition to your strategy as well as your options out on the battlefield, you just need to make sure that you have the best paintball pistol for you.