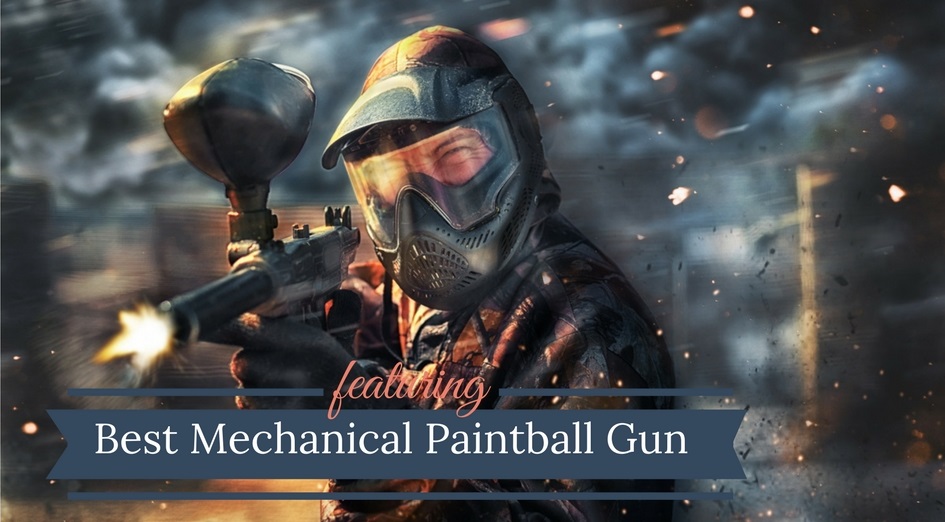 Keen paintball players as well as those addicted to the game increasingly strive to lay their hands on the best equipment they can get. Lately semi automatic paintball guns seem to have become the preferred guns for paintball players.

Getting hit by one of them is not painless, but they can really take down your opposition much faster. If you want to stand a chance against your opponent, using a reliable, fast-firing and accurate paintball rifle is the way to go.

The question ‘what is the best mechanical paintball gun’ is not easy to answer. To help you out we will explain the 3 main types of paintball guns.

This type of mechanical paintball gun is very simple to operate. You can load a paintball in the firing chamber and cock the gun by pulling the handle back. Even a novice will be able to handle a pump paintball gun, which is good news for those who are looking to gain a foothold in the paintball arena.

These paintball guns are real semi automatic paintball guns. By using compressed air they shoot the paintballs at high speed. Each time you pull the trigger, a bolt will push a ball into the barrel and seals the ball simultaneously.

Most paintball guns are semi automatics but when you opt for an electronic paintball gun you’ll get a full automatic gun. You no longer have to squeeze the trigger for every shot: squeeze it, hold it and cover your opponent in paint.

How Does A Mechanical Paintball Gun Work

A mechanical paintball gun requires compressed air to fire paintballs at high speed. It either uses air or CO2. Each time you fire, a paintball is loaded from a magazine. A small bolt places the ball in the barrel. It will also ensure the barrel is sealed before the gun can be fired. Once you pull the trigger, the bolt will strike a pin, just like a real gun. This pin will open a valve that shoots the compressed air down the barrel. This compressed air will propel the paintball towards the target that you are aiming at.

How To Choose The Best Mechanical Paintball Gun With the market flooded with paintball guns it is difficult to decide which gun is the best mechanical paintball gun. Especially when you are considering buying a semi automatic paintball gun.

Like with any purchase you make, the first question you will have to ask yourself is; how much money are you willing to spend? We have come across paintball guns that you can already buy without breaking the bank. But obviously, there is the fully loaded option too which can cost you an arm and a leg.

Once you have decided your budget for purchasing a paintball gun, you should check out your options available for you. You have the option to purchase a paintball gun online or from a store, but reading up on reviews at reputable websites is your best bet in knowing the pros and cons of each so that you can make an educated choice.

This paintball gun was specifically designed for speedball hence its design is focused on ease of operation the gun.

The design of the Azodin Kaos-D II would look great on a runway – sure, it doesn’t look like it would be at home with a S.W.A.T or SEAL team, but many professionals use this specifically for its firepower and accuracy in the paintball arena.

You know how the saying goes; never judge a book by its cover! That’s certainly a lesson we’ve learnt from the Azodin Kaos-D II Semi Automatic Paintball gun. The gun is absolutely one of the most accurate guns we have tested for both shots at close range as well as those long-distance ‘kills’. As it is also very reliable and easy to maintain we can fully understand why it is the gun of choice for those entering the game. As the gun is very lightweight, it is easy to carry which comes in handy when you are one of the few ‘last men standing’.

We do have to point out that we have picked up several complaints about feedneck issues. It seems that this gun in particular experience trouble with feeding the paintballs from the hopper to the gun every so often. The gun’s feedneck is not compatible with hoppers of certain brands. Our advice: be cautious when you buy this gun or a hopper.

The Tippmann X7 is a lightweight gunwith an aluminum body. Paintballs are stored in a reservoir that is fitted on top of the gun. The gun may look elegant but is, in fact, a mean killing machine. It is robust which comes in handy when you are involved in intensive combat missions. The short barrel might not look impressive but it gives you the advantage of easy handling. You are using your gun to shoot somebody and out there in the paintball yard it is ‘shoot to kill’ that rules the world. Conquer the paintball arena with our Editor’s choice.

This .68 caliber gun experiences barely any recoil thanks to the Spool Valve design. The FlexValve technology enables this gun to operate below 300 PSI to have optimal air efficiency. A 4500 PSI tank is fitted on top of the gun which enables you to fire 1,400 shots easily. The gun has two firing modes -manual and electronic.

As you hardly experience any kickback when you fire the gun, this gun will provide you a very accurate shot. It also shoots very quietly, which is really useful when you’re trying to sneak an attack on your opponent

With up to 200 balls stored in the hopper and a new cyclone feed system, this gun is certainly one you’ll need when you want to settle a dispute at the paintball range. As soon as you pull the trigger, a portion of the gas that is needed to operate the piston is captured. Once the piston comes forward it pushes the feed system which sends another paintball into the chamber leaving you with a gun that is locked and loaded.

Now here is a gun that will make you look and feel as if you are a real soldier! The D3FY Conqu3st Semi Auto Paintball Marker Gun with Barrel was one of the most budget friendly paintball guns we identified being worth to be brought to the farm. Sure, this gun is available with many designs but we opted for one that was painted olive. That’s the color of choice of the US Army (and many of their counterparts). The only problem is that the unique colors that have been used allows your opponents to identify your shot quickly.

You’ll have to be trained a little bit to fire this gun accurately as it does have recoil. Shots it fires are fired smoothly and nicely and it is very likely that you will hit whatever it is that you are aiming at. Before you decide to participate in some serious paintballing we advise you to surf the internet and look up what people had to say about changing the trigger. Adhering to their advice might improve your accuracy. Don’t tell me that that is not an advice worth investigating?

This gun gives you 4 options from which can select how you want to fire it: 3 shot burst, Full Auto, PSP Ramp and Semi Auto.

There have been complaints from a few users about the air pressure, which leaks, affecting the firing power of the D3FY Conque3t. However, our tests revealed that this paintball gun gives both experienced and newbie paintballers an added advantage on the playing field.

While conducting our research we came across many different paintball guns and many different people and companies that are selling these guns. As we said in the beginning what you want before you invest your money in either a mechanical or semi automatic paintball gun. Talk to other users and read up on the internet what other people have to say. You’ll never know whether this knowledge might come in handy. But once you have made your choice, we would like to say; fire away!