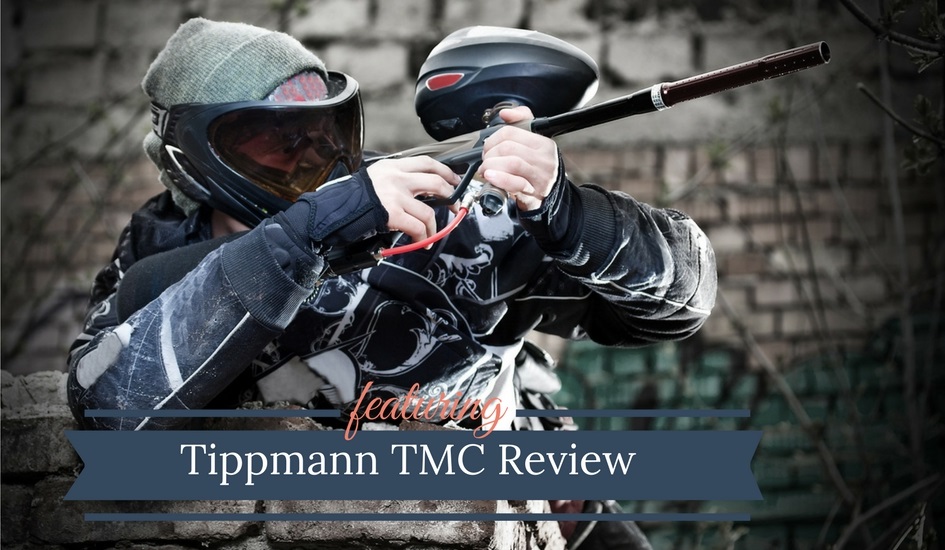 One of the most popular mag fed guns on the market, Tippmann TMC comes from the reliable and well-known Tippmann brand. Because of its reputation and popularity, we absolutely had to write up a Tippmann TMC review. An impressive scenario marker, the TMC allows you to alter its ability to meet your expectations and your needs as a paintball player. Using either CO2 or HPA, you will get the fire power that you need while still staying in a military-styled paintball combat.

The name Tippmann already brings the idea that you are getting one of the most durable paintball markers out there and the TMC definitely does not disappoint. The Tippmann TMC has converted dedicated TCR users who are surprised by its comfortable grip and its easily adjusted stock to suit your stance. Using the standard .68 caliber paintballs, the TMC is a high performer, allowing you to choose between a magazine or a hopper in your game. Between its reliability and all of the attachments that you can add on to make the marker truly your own, woodsball and scenario paintball players are not going to be disappointed with all of the features that comes with the Tippmann TMC.

The versatility as well as the feel of it, is what makes writing a Tippmann TMC review so important. The Tippmann TMC is a mag fed paintball marker, designed with an AR-15 style shroud. Meant to mimic a military live ammo weapon, the TMC can be completely accessorized to give you the feeling of realistic gameplay. It comes with two 20-round magazines as well as a dummy mag if you want to use a hopper instead of the magazine, allowing the weapon to be as versatile as you need it to be.

The TMC also has four-sided picatinny rails to allow you to customize it to meet your needs, a fully-functional charging handle, easy-pull trigger, 12 inch high performance barrel with muzzle break, an over molded rubber grip, and an internal stainless steel gas line to keep your sights clean during the game. This is ultimately designed to be the real deal in terms of scenario play, giving you the feel and look of an assault rifle. Even though it comes with a 12 inch barrel, you can replace the barrel with a longer one, if you would like. The TMC comes in either black or black and tan, ensuring that you will be able to blend in on the battlefield.

The TMC will also you to use either CO2 of HPA in order to get the power that you need. The accuracy of the 12 inch stock barrel is what you would expect from an out-of-the-box barrel, meaning it is not as great as you would hope it could be. Luckily, because the TMC is versatile, you can easily upgrade the barrel for little cost, allowing you to improve accuracy with a barrel that is better-suited to your needs. You can also improve the accuracy of the TMC by adding a red dot or sight to one of the rails, or even upgrading your barrel to a sniper barrel to improve your ability on the battlefield.

Overall, the Tippmann TMC fires straight and reliably, but it is not intended to be a semi-auto paintball gun. The speed that you shoot a round is based more on your ability to shoot quickly rather than the weapon doing that for you. Since it is mag fed, the shots are meant to be used with patience and accuracy, though it will let you use a hopper to spray paintballs if that is more your style. The TMC uses the standard .68 caliber paintballs as well.

How Much Does Tippmann TMC Weight

In terms of weight, the Tippmann TMC is heavy. A 6.55 pounds, you are not going to be running at the same speed as you would with a lighter marker. The heavier weight is due to its traditional AR-15 design that allows you to have the feel of a combat weapon. The weight will also increase depending on the customizations that you make to the rails or if you change out the 12 inch stock barrel with something that is larger. The TMC is not a lightweight speedball gun, but instead a heavy-duty, military-style gun that works well for scenario play.

Like many weapons in the Tippmann brand, the Tippmann TMC is reliable. The magazines can hold up to 20 balls, but in order to ensure that they do not get deformed in the magazine, it is better to use 18 or 19 instead. The TMC will use every paintball that is loaded in the magazine and can fire thousands without having any ball breaks in the magazine or barrel. You cannot get better reliability in terms of shooting and durability. In the event that something does happen on the battlefield, the TMC is easy to clean and repair, keeping you going.

How Efficient Is The Tippmann TMC

Overall, the Tippmann TMC is efficient on air, allowing you to take your mind off of your air level during battle. If you which to using a hopper instead of a magazine, you will burn through your air more quickly, because you will be shooting more paintballs than you would have been otherwise. Since you shoot only one round at a time with a mag fed gun, you should not be burning through your air power as quickly as you might with another paintball marker. On the topic of efficiency, since the TMC is reliable and will not cut your paintballs, you will also not break paintballs in the barrel, conserving the amount you have.

Because the Tippmann TMC runs off of high pressure, it is not a quiet marker, but it is not the loudest out there either. The TMC is not any louder than you would expect from an AR-15 style gun. If you are concerned about whether the sound will give away your position during battle, you can add on a sniper barrel with a silencer option to try to muffle the noise you make firing. If you decide to use a hopper instead of the magazine, the gun is absolutely going to give away your position as hoppers are not a good option for stealth.

Who Is The Tippmann TMC Best For

​The Tippmann TMC is an excellent marker for intermediate to pro-level paintball players. Because it is ideal in scenario play, beginners might not have the easiest time operating the TMC during a battle, especially since it allows you so many options for customizations that a beginner would most likely not even make good use of. Both intermediate players, who have had some good experience and pros, will enjoy the customization ability and feel of the TMC.

The TMC is a woodsball or military-simulation type of paintball marker. It is not intended for nor could be used in speedball. The mag fed guns are strictly meant for the dedicated players who like to use military-level tactics and strategies, using one ball at a time, rather than the speed that comes with the electronic markers used in speedball. Additionally, since it is designed to mimic an AR-15, you are going to get more of a military-simulation feeling from using it as well. Paintball enthusiasts who really like to get into scenario play are going to have an excellent time with the TMC. If you like the idea of it, but like the option of spraying paintballs quicker, you can adapt this to use a hopper easily.

No Tippmann TMC review would be complete without taking a complete look at the gun. Ultimately, the TMC has all of the reliability that Tippmann is known for, which means it is going to hold up during a battle as well as last for a long time. You will not need another paintball marker as long as you stay in woodsball, but the TMC is absolutely not a speedball weapon. With the customizable options, you can change out the barrel and sights of the TMC, allowing you to us the marker as you would want to.

The TMC is best for the players who have been around awhile and know what they want and expect from a paintball battle, taking the weight and sound of the Tippmann TMC with the knowledge that it is what you get from a military-style paintball marker. With all of the customizable options, you are not going to be disappointed in the TMC’s ability. You should expect a gun to perform in a scenario play as an AR-15 would perform in a real-life military situation and the TMC delivers on any expectation you might have. Bottom line: the Tippmann TMC is an excellent marker for experienced scenario/woodsball players.