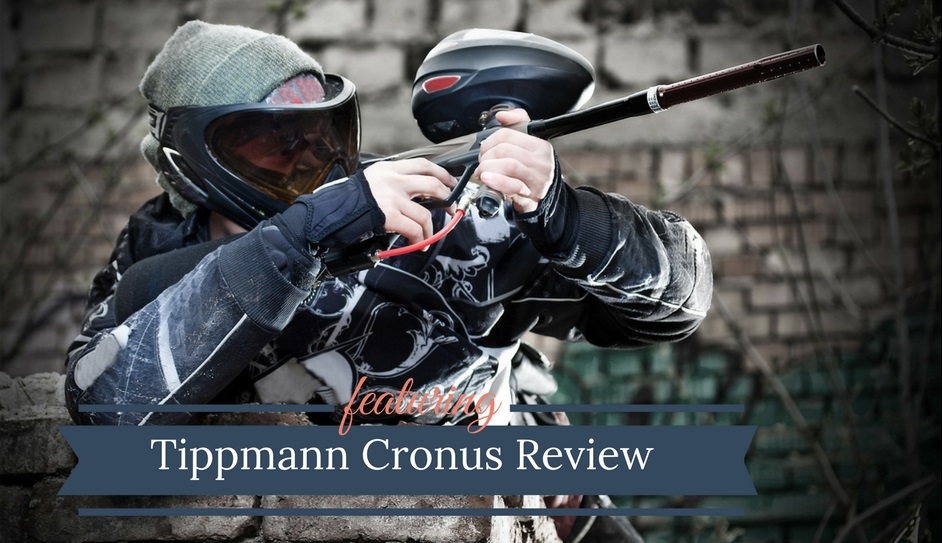 One of the most popular paintball markers you can get, the Tippmann Cronus resembles a military rifle while giving you the durability you need from a paintball gun. Because of its unique qualities, it is essential that we write a Tippmann Cronus review to go over what the Cronus really is.

If you are new or have some experience in the world of paintball and have been considering getting a mechanical paintball gun with a hopper, the Tippmann Cronus might be the right gun for you. Tippmann also offers the upgraded Cronus Tactical which has more features that the standard Cronus, but both are reliable.

This budget-friendly paintball gun comes from the Tippmann line of reliability and quality and is one of the most-rented paintball guns out there. But there is still more to the Cronus than the standard Tippmann marker. A good choice for both beginning and intermediate paintball players, the Cronus is lightweight to help the inexperienced players run with it without a struggle. Similar to the Tippmann 98, the Cronus is made to hold up for long term use and to be used in a variety of weather. A good combination of durability and performance, the Tippmann Cronus is an excellent choice for the paintball player who is just getting his or her feet wet.

The Tippmann Cronus is modeled to look like a military-style rifle and is designed to be as durable as the real thing. It comes in a neutral tan and black color to help you blend in better on the battlefield, with an internal gas line to keep it out of your way. Made with both fixed front and rear sights, you can be sure the paintball hopper is not going to inhibit your ability to aim when using the Tippmann Cronus.

The 4 picatinny rails will allow you to modify the gun further, whether you would like a flashlight or even a red dot. Beginning players might not know if they would like to use them, but as you get more into the game, you will have a better idea of the kind of game you would like to play and which modifications are ideal for you. The vertical soft over-molded rubber grip will ensure that the Cronus stays in your hand, even if you are playing in the rain. Designed to be low maintenance, the Tippmann Cronus will not give you any trouble when it needs to be cleaned or in the event of a jam, which is especially important when you do not have mechanical experience or paintball experience.

The Cronus uses a hopper to launch its ammo, allowing you to shoot rounds rapidly. The average distance you are going to get is 260 to 300 feet per second, but it could be up to 350 feet per second if it is calibrated correctly. It uses compressed air or CO2 to power it, ensuring that you get the fire power that you need to shoot well. The hopper that comes with the Cronus can hold up to 200 paintballs, which is standard with any hopper.

The high performance barrel is ported and should not disappoint, but if you would like something shorter than the 20 inch barrel it comes with, you can upgrade or swap it out for a difference barrel. While the sights are fixed, which may not make all users happy, for a beginner, having both front and rear sights will make your accuracy much higher than it might have been otherwise. The hopper that comes with it is a gravity feed hopper, meaning the paintballs move into position when agitated by the gun once it is fired. This will mean you cannot fire as quickly as with other hoppers that are battery-powered. The Cronus will also not work with just any kind of hopper, so you might not be able to switch to a rotor hopper later on.

How Much Does Tippmann Cronus Weight

The Tippmann Cronus is considered to be lightweight coming in at 3.7 pounds. It is not the lightest mechanical marker that you can get and any accessories that you might add on will weigh it down. The weight also does not include the weight of the 200 paintballs that you will load to your hopper before you begin a battle. So even though it seems like it might be fairly lightweight, it can easily get heavier as you go and you can also find lighter markers if you choose. Just remember that you are going to need to be able to run with it and carry it throughout a battle.

Is The Marker Reliability

The Tippmann line is known for its dependability and the Cronus is no exception. The Cronus is comparable to the Tippmann 98, which has a reputation for being a reliable paintball marker as well. The durable composite body is meant to take a beating, ensuring that your marker is not going to break on you no matter what happens on the battlefield. The fixed rear and front sights help to ensure that you hit your target every time as well and the in-line bolt system is also reliable. Overall, the Cronus is not going to fail you when it comes to living up to expectations.

How Efficient Is The Tippmann Cronus

In terms of efficiency, the Tippmann Cronus does a great job. Because of the in-line bolt system as well as the gravity-feed hopper, the Cronus will not burn through your gas. The gravity-feed hopper also means you will not be spraying paintballs as quickly as you would with a battery-operated hopper ensuring that you are not going to blow all of your rounds immediately, which is a definite possibility with the less experienced paintball players. Basically, the Cronus is an excellent combination of efficiency and simplicity, taking any complications out of its operation, making it a good choice for the newbie player.

The Tippmann Cronus is not remarkably loud in terms of mechanical paintball markers. Because the hopper is not battery operated, it will run quieter than other markers of a similar style. One of the biggest add-ones that you can get for the Tippmann Cronus, however, is the silencer which will muffle the sound down more and keep it from completely giving away your location on the battlefield. If you fire more conservatively, the sound will not matter as much as your location will be harder to track than if you just spray the balls.

Who Is The Tippmann Cronus Best For The reason that the Tippmann Cronus is one of the most popular paintball guns to rent is because it is simple to operate and easy on beginners. The Cronus will make paintball simple on beginning to intermediate players, taking away any guesswork and letting you hone in on your skills as well as your personal strategies on the battlefield. A more advanced or professional-level player might find the simplicity of the Cronus too restrictive, not allowing for extra modifications.

The Tippmann Cronus is a mechanical marker so it works best in woodsball. Because it has a hopper, a military simulation might not work as well with it, but if you are in a low-key battle, you might be able to pull off military strategies even with the hopper, but ideally, the Tippmann Cronus is for beginning woodsball players who are just beginning to navigate how the game works and how to use a paintball gun correctly. This is not a marker than can be used in speedball since you would need an electronic marker and something that can fire much quicker than the Cronus can.

When it comes to a Tippmann Cronus review, there are several factors that you should look at before you can determine whether it is the right paintball marker for you. Whether you are looking at the Cronus or the Cronus Tactical, both are reliable and easy to pick up and easy for players at any level. Since the Cronus is the most rented paintball gun on the market, you will need to ask yourself whether you want to purchase one to keep or if you would rather continue to rent a marker until you have reached a higher level in your gameplay. Either way, the Cronus is a great introduction to paintball.

Using a marker with a gravity-feed hopper will slow things down for you in the action, but that is a good way to get you to focus more on the game and how you play, instead of blindly spraying paintballs in hopes of hitting your target. The Cronus is also economical, helping you to conserve your gas, turning a battle without losing out on any playing time. Overall, the Tippmann Cronus is a great paintball marker to get started with and get a feel for paintball, but it will not be satisfactory for more advanced and experienced paintball players.