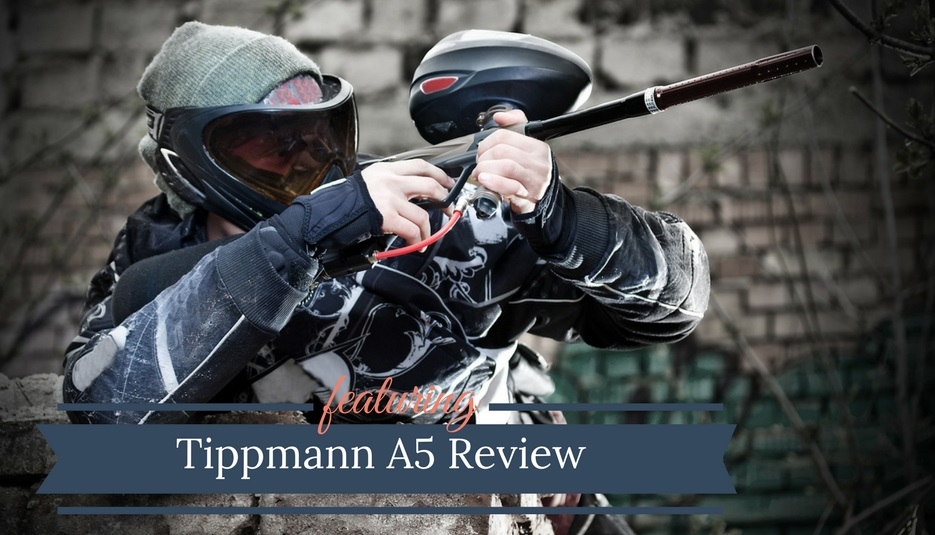 Ideal for paintball players of different abilities, the Tippmann A5 is one of the most popular scenario markers produced.

For beginners, the Tippmann A5 offers reliability mixed with simplicity, allowing you to upgrade or work on the gun without a major learning curve. For intermediate-level players, the A5 can take you up to the next level in your gameplay, allowing you to modify it to meet any need that you might have in how you play on the battlefield.

The Tippmann A5 will give you the dependability that you need in any game of paintball at a price point that will please everyone. Since the Tippmann A5 can grow with you as a player, you will find that the amount of customizable options that you have will give you the room to change your gun as you change your play, allowing you to make it truly your own and adjust it as you need to. With its high performance rating, there is no question as to why the A5 is popular, but what is it that makes it more reliable or better than any other .68 caliber paintball gun on the market? The Tippmann A5 has a lot of qualities that make it more fun to own than some other paintball guns.

Our Tippmann A5 Review Results

What's The Tippmann A5 Design

The Tippmann A5 is designed for scenario and woodsball play and comes in camo, silver, or black to allow you to blend in better with your surroundings during battle. The gas line of the gun is also in black in order to give you a better shot of stealth and keeping colors concealed. In order to achieve its rapid fire reputation, the Tippmann A5 has a Cyclone Feed System that can feed up to 15 balls per second. The front grip was designed so that it is larger than the average grip, resulting in a better feel as well as allowing you to customize and add on mods easily.

Because the A5 is really great for beginning to intermediate-level players, the design is all about simplicity. Not only is it easy to add-on mods, but the entire weapon is easy to clean and maintain. It even has tombstone connections to make maintenance easier than ever before. The gun itself is able to be field tripped without the use of any tools in less than a minute. The design also allows for a two position external selector to let you go from safe mode straight into firing mode when you need it. While one of the biggest cons to the A5 is that its range is not the best, it does have some perks that help with accuracy. The Tippmann A5 has a low-profile hopper with an offset design to clear out your sightline. This means you will not be fighting over the gun itself when you are trying to aim on an opponent. The accuracy is further improved with its 8.5-inch stock barrel that is stone-honed, improving your accuracy while reducing the amount of noise that comes off a shot.

As we said above, the Tippmann A5 has a Cyclone Feed System, which gives you a rapid fire option of shooting 15 balls per second, all without the use of batteries. The effective range of the A5 is listed as 150 feet, but it has also been reported as low as 100 feet. As it has the ability to run off of CO2, compressed air, or nitrogen, the A5’s power is not going to disappoint, regardless of the type of gas that you choose to use.

If the fire power and accuracy does not seem like its doing its job for you, the A5’s customizable body will let you add whatever attachments on that could help your game. Regardless, the 800 psi still packs a punch.

How Much Does Tippmann A5 Weigh

The Tippmann A5 has a light receiver design that naturally reduces the weight of the entire marker. The gun itself weighs just over 3 pounds, making it light and easy to move with, but not as light as other guns that are similar. Because the body of the gun is somewhat lightweight, it is easier to remove push pins in the A5 than other comparable scenario markers. The weight also does not get in the way of rapid fire. It is important to note that with any add-on or modification of the marker, the weight will increase and the gun could be harder to carry.

Is The Tippmann A5 Paintball Gun Reliable

Despite the shortcomings of the Tippmann A5 in the weight department, no one can argue with the reliability of it. If you are simply a casual paintball player, you might not even need to purchase another paintball gun after you have customized the A5 to meet your needs. While the marketplace for paintball guns has more markers that are lighter to carry around, the A5 is in an elite category when it comes to reliability. Having a gun that you know will fire when you want it to and not break any balls in the process is completely valuable on the field.

How Efficient Is The Tippmann A5

Designed simply to make your game easier, the Tippmann A5 is incredibly efficient, allowing you to take the entire weapon apart in less than a minute, using no tools at all. There have been reports that there is a learning curve when it comes to assembly, causing it to be slower for new Tippmann owners, but like everything else, if you practice, the process will become easier.

Beyond taking it apart quickly, the A5 is not going to drain your air or CO2 either, ensuring that your tank is going to last all throughout a battle scenario.

With its 8.5 inch stock barrel, the A5 has been stone-honed to reduce the amount of noise that it gives out, keeping you as stealthy as possible on the battlefield. It is important that paintball weapons are a silent as possible in woodsball, allowing you to sneak up on your opponent and shoot them while they are looking another direction. Having a quite gun is important. Yet, as there are so many options with the A5, you could always swap out a different barrel to get a quieter gun. Just remember that sound can make or break you during battle.

Who Is The Tippmann A5 Paintball Gun Best For

The Tippmann A5 is without a doubt one of the most popular types of marker of its kind that you can get. The gun is a good choice for beginners who are just getting started in paintball and need a weapon that is both reliable and easy to work on. The A5 can go beyond beginners, however, as it can be modified to suit another players’ needs. This will give you more options during the game and in how you play, allowing you to take yourself up to the next level. Expert players do not usually use this type of gun, but it is versatile enough to give you most options if you have been working with them longer.

The A5 was not made for speedball and is meant to be a woodsball weapon without a doubt.  While speedball can also have a quick fire option like the A5 has, the A5 would be too clunky and heavy to use during speedball. The A5 also works great in scenario play, which usually happens in the same kind of environment as woodsball, but gives you a specific backstory and objective that you have to follow in order to win.

Generally speaking, the Tippmann A5 is a popular paintball gun for a lot of different reasons. Whether you are just a newbie who wants to join in on the paintball fun or someone who has been playing for a little while, the A5 offers a lot of versatility. The longer grip design will help you keep the weapon in its hand, regardless of the weather conditions. Since the biggest issue with the A5 is its weight, the ideal solution would be to adjust yourself to the weight before setting out into a battle.

If you are a casual paintball player, the A5 would probably be a nice and reliable choice for you. If you are a more advanced player, you should weigh all of your options. Other guns might give you more accuracy at a longer range.  The A5 does offer a large amount of modifications, but with even modifications, the gun will get heavy.

The consensus is that the Tippmann A5 has a lot fewer faults than it does pros and it is still the go-to paintball gun for beginners and intermediate players alike. It is an excellent starter weapon that can grow with you as you get older and your skills enhance.