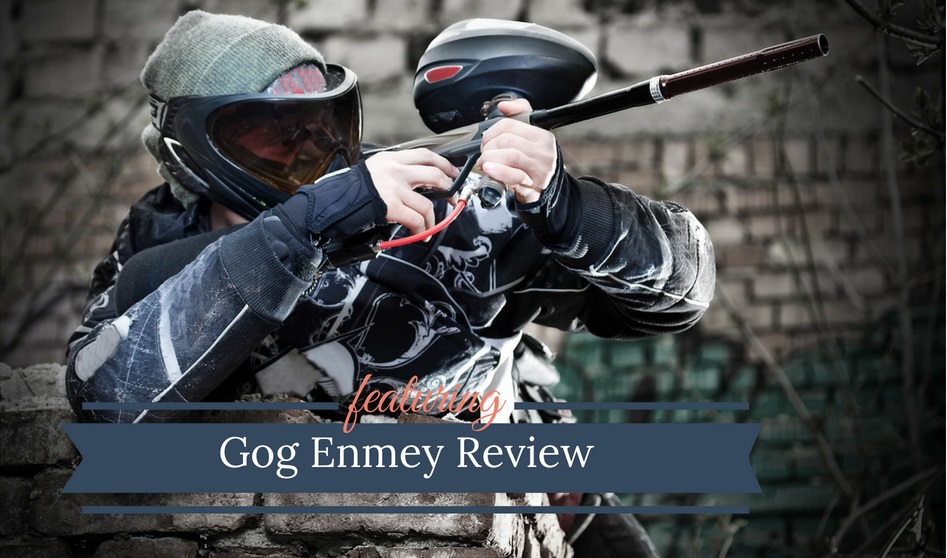 With what seems like an overpopulation in the world of paintball guns and accessories, it’s no easy task to find the right marker. If you take the time and review to compare each gun from the next, you could have a better idea of which marker will work best for you.

However, that task could take ages to do so we’re going to help you out by giving you a review of one of the most popular and best paintball markers out there: The GOG Enmey.

This GOG Enmey review will look at each of the different aspects of what makes a marker a good one. GOG is one of the standout companies that produce paintball markers for both beginners and for older players who have had experience in the game. One of the newest markers just released is the Enmey marker. Let’s take a look at how it shapes up.

Coming at it from a design perspective, the Gog Enmey is not going to be set apart by anything too fancy, therefore, you could say that the design is pretty standard. However, the “standard” also means pretty reliable and in a paintball marker, you're going to want a reliable one—with a heavy-duty pistol grip, a forward grip, and a paintball loader located on the top. The air tank is set on the bottom of the marker.

What sets the Enmey apart from other markers out there is how it operates. Whereas most markers in this category work through batteries, hammers, and springs, the Gog Enmey innovatively uses a pneumatic design that is used to propel balls in a forward direction. Since it eliminates the use of all those extra moving parts, it means that there are fewer pieces used in the process, which means less of a possibility that they will break down.

…And it works—this design gives off a smooth and steady stream of paintballs, even when you're playing in long games.

The paintball marker is designed with an integrated regulator, which keeps it shooting a safe PSI, maintaining constant pressure and can accept Co2 or HPA.

The body is crafted with a machined aluminum receiver and a composite polymer shell, making the paintball marker extremely light to carry which makes it perfect for long games. Not only that but the trigger is also short and easily shot off with a small amount of pressure.

The Gog Enmey is highly customizable, with the body color interchangeable with a body color kit. It’s also upgradable, with the option of introducing an electronic kit, a trigger solenoid, and implementing game modes.

The design is built using low bolt pressure and anti-chop technology to get the most out of every fire. It works by returning the bolt in its original position automatically—which takes out the possibility of getting a chop while you're on the field. It’s easily fixable too, if it does get blocked, you can simply remove the bolt and clear it.

The high-end spool valve serves it purposes of increasing the shot’s accuracy because it releases a consistent amount of air flow, no matter how many times you take a shot.

If you are looking to fire multiple shots in the game, you can group them better with consistent shots across the board.

If you are looking for a great balance between accuracy and firepower, the Gog Enmey can give you the tools you need to make the shot when it counts the most. With its specific features, the Enmey has less chop, kick, and inaccuracy than most guns—particularly ones within the same price range.

How Much Does Gog Enmey Weight

Even though it is relatively low-cost, the heavy plastic indicates that it’s built to last. Its solid construction makes the marker stable, however, it is lightweight—regardless of the material. Also, even if the paintball gun is fully loaded, players will come to find that the weight doesn't make much of a difference, no matter how long the game is and how long they have to carry the gun around for.

Although the plastic material may seem a little fragile, in most cases, there are no concerns with chipping and breaks.

The marker is highly reliable since it has fewer moving parts than most markers out there. The chance of breaking is a lot less because there are a lot fewer parts that have the opportunity of being faulty.

The reliability, especially for a beginner, with this marker, is relatively high. It has simple maintenance, a shallow learning curve for assembly and will last you the entire game and a long time in the beginning stages of your paintballing career.

Even with its most basic model, the Gog Enmey is reliable. However, if the player so desires, they can easily upgrade and customize to suit the marker best for their needs with new barrels and hoppers, among so much more.

The brand GOG has played its hand right in the market for a long time—so there is definitely a reliable and efficient history behind its maker.

The original Gog Enmey is efficient—especially for beginners—with a low force anti-chop and low pressure on the bolt that eliminates ball breakage in the barrel. Therefore, right out of the box in its original state, the gun works well and efficient.

However, it will only become better if you take the time (and money) to invest in some upgrades. The first few upgrades you should focus on is a new hopper, a new barrel upgrade, and possibly even the Freak barrel from GOG, which works spot-on with this marker.

From the way it’s made, the Enmey has a spool driven valve, and through this and the other designing details, it is run with relatively low sound. It can even be stated that the sound is much quieter than guns that are in the same price or skill level range.

This means that if you are looking to invest a certain amount and want a quiet paintball marker, the Enmey is a great purchasing decision. Especially as a beginner, the sound and kickback might scare or turn you off from shooting a marker but that’s not the case with the Gog Enmey. It boasts a low PSI, which means that there is less kickback or recoil.

Who Is Gog Enmey Best For When combining the price, the maintenance, and ease-of-use, it is easy to see that this marker is perfect for entry-level or beginning paintball players.

The way the marker is designed, with a mechanical spool valve marker and no electronic parts, makes it simple for a newbie to figure out.

Even though it is simple to use and seems to be pretty basic, it is actually possible to keep up with other markers who rank higher because of its quality. This marker boasts a low-pressure design that emphasizes safety and ease-of-use.

Especially since it has a high rate of fire and boasts a reputation of high accuracy, new players will not only feel comfortable carrying the lightweight marker around, they will also grow as players with confidence as they learn how to nail their shots.

It’s also a marker perfect for beginners because it grows with you as a player. The marker is highly upgradeable—so as you advance, so can it.

Maintenance is another issue often seen with beginners across the board. However, the Enmey’s bolt screws from the back, the main valve is removed easily, and parts are simple-to-replace, making for a no-brainer when it comes to maintenance.

We hope that this Gog Enmey review has helped you compare the Enmey with other markers you've been looking at and help you take one step closer to making your decision.
Gog Enmey Pros
Gog Enmey Cons
View On Amazon

Overall, the Enmey is a fantastic choice for new players across the board or for more experienced players who are looking to have a backup gun in stock. Although it’s not the highest quality marker out there, it definitely has its strong points, one being that it is highly upgradeable—allowing it to grow with you as a player.