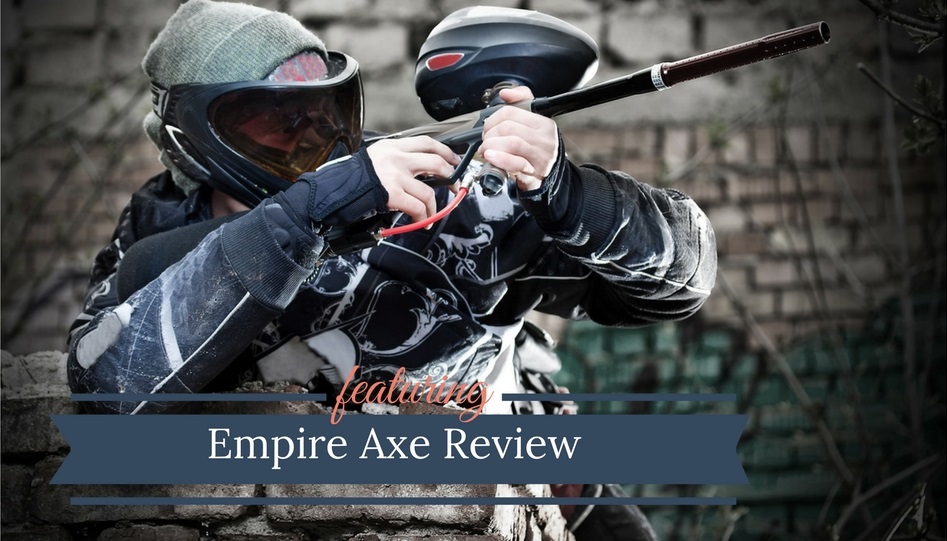 If you are looking to start paintballing or if you need to get some help in choosing the right marker for you, we hope that we can help. We know that there are so many markers out there to choose from, so picking one out of millions might be a little bit of a stressful task.

From design to firepower, accuracy to the weight of the marker itself, our Empire Axe review will take you through all the different components that make paintball guns what they are today. For example, one component, whether it is the sound or the efficiency, can set one marker far apart from another. The quality of design and production can sway you to purchase a particular brand or the dependency and popularity of one edition can help you choose it over another.

We hope that the Empire Axe pro review below can help you with your paintball gun purchasing decision by going through the entire process and laying out the finer details.

The newly improved design is accurate, smooth, and lightweight. It comes with an accurate Driver XX two-piece barrel which is interchangeable. No matter what type of paintballer you are, this particular paintball marker is designed for beginners and professionals. You can easily play and assemble the marker, regardless of its esteemed reputation, in the woods or behind bunkers while under pressure. The body of the Empire Axe is made of aluminum and has an adjustable trigger, a single push-button power switch, pressure controlled poppet engine, and break-beam anti-chop laser eyes, which really sets it apart from other designs of paintball markers out there. The wrap-around foregrip with micro-texture for non-slip protection also allows you to play worry-free of the gun slipping through your fingers during crucial moments.

The Empire Axe is not only lightweight but also has a shockwave board integrated into the design that offers multiple adjustable firing modes, from semi, ramp, burst to full auto mode.

Regardless of its low-pressure operation and being gentle on the fragile point, the Empire Axe doesn't fail to deliver. The superior velocity consistency highlights a shot-on-shot accuracy that can go unmatched on the field.

Its high-quality shooting performance gives the marker an accurate shot, without those unnecessary, pesky delays found in other editions. You can go through 5,000 paintballs without any breakage, which makes for an accurate shot, as well.

The wide range shooting modes also are fantastic features to have in your back pocket if you want to switch it up on the field, depending on the shot you need. With the Empire Axe, you can let out rounds of shots without having pauses between by walking the trigger with a simple motion. The firepower and accuracy of the Empire Axe are really what makes this particular stand out. It has the reliability, accuracy, and firepower to pack a punch on the field when you need it the most.

How Much Does Empire Axe Weigh

Extremely easy to hold and lightweight, only three pounds, the Empire Axe also has a spacious frame to easily maneuver through its different manipulative qualities. If you are looking to play for hours, this marker is a perfect addition to your collection because it won’t get you fatigued during a long, drawn-out game.

Since it is so lightweight, you can maneuver with it easily — jumping, crawling, diving or sliding— all with the Empire Axe in your hands without a shadow of a doubt that the loader won’t slip off and it won’t break. This is a highly sought-out promise.

The reliability of the marker is in the design. The Empire Axe is a homeless marker, which means that you as a player don't have to worry about the hose of the marker malfunctioning. This guarantee relates to its reliability, along with its brand name and other components of its design.

Most other paintball markers have a low-reliability factor when it comes to malfunctioning, broken or leaky hoses. These will often lead to costly repairs. Investing in the Empire Axe paintball gun, you won’t have to worry about that and will be able to shoot with confidence for a long period of time, well worth your investment.

How Efficient Is The Empire Axe

Being able to have the confidence in your marker to hold up to not only your playing style but years of use is priceless. The efficiency of each shot but also the assembly and maintenance of your paintball marker plays an impacting role on how efficient the gun is overall.

The Empire Axe shoots not only at a rapid pace without any type of mechanical hassles with minor maintenance— just make sure your o-rings are lubed up. It is efficient, accurate, and consistent, offering between +-3 and +-5 on the Chrono. These facts alone set it apart in efficiency when compared to other markers out there.

The length of the barrel of the Empire Axe makes it a stealthy contender to be able to snipe from a healthy distance when out there playing. When you are out on the field, no matter what type or distance, being able to dish out shots without the loud feedback and kick from your gun is as important as the shot itself.

With the Empire Axe, you don't have to worry about sound affecting your play. The shots are rattled off in smooth sequences, not only with minimal delay but also quiet sound. This can be considered one of the most components for your gun to have.

Who Is The Empire Axe Paintball Gun Best For Since it is simple to clean, easily accessible and easy to use, the Empire Axe is a great paintball gun for any level of play. Even if you have never held a paintball marker before, you are able to re-assemble the Empire Axe with confidence since it has such a straightforward design.

The product also normally comes with the small toolkit that can make it even easier to maintain. With lube, screws, extra detents, Allen keys, and o-rings, this brand sets it apart in making assembly and maintenance an easy fix. It is so easy to maintain that it doesn't even need tools to remove the bolt.

The marker is also lightweight, yet has a high-factor of quality. This makes the Empire Axe best for anyone who needs to shoot accurately in long distances. However, normally this marker is tailored for the most advanced hands since it has exceptional features that allow for hours of play. It can shoot over 300 fps, which means you can shoot hundreds of rounds of paintballs without wasting it. It is also pretty versatile, ranging from all the various scenarios — adaptable for woodsball and speedball play. This factor alone will help you gain enough bang for your buck.

If you are looking for a marker that has simple maintenance, is lightweight, shoots fast no matter what style of paintball you're playing and has a fully adjustable trigger without really, truly, breaking the bank, the Empire Axe is the marker you're looking for.

This mid-level range marker is backed by a reliable brand and has the aspects that speak for themselves when it comes to statistics. No matter if you are a beginner or an advanced paintballer, you can use this paintball marker because of its simple to use and easy to maintain features.

We hope that this Empire Axe review has helped you set out of the various aspects that set the Empire Axe apart from all the others. You can also use this guide to help compare various paintball markers to the Empire Axe before you invest in a purchase.