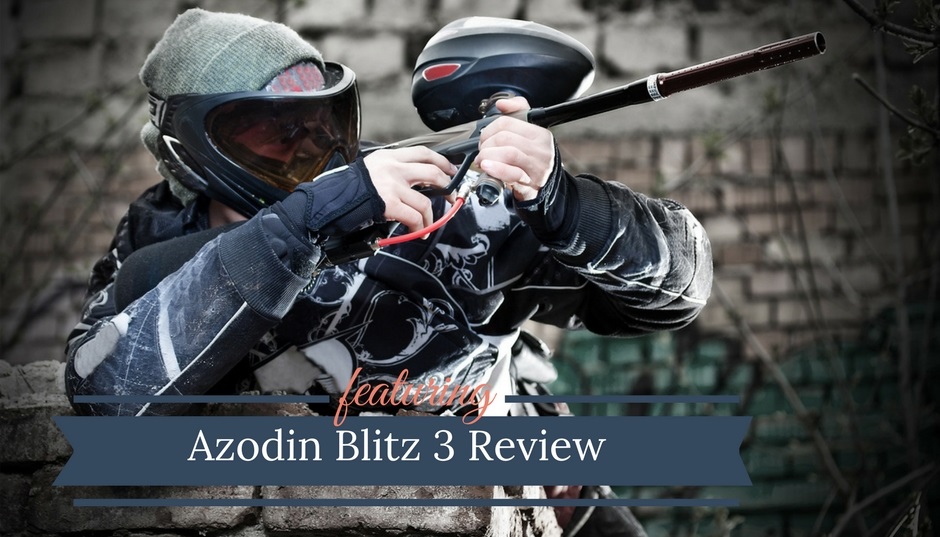 When starting out in paintball, it is essential to have paintball marker options out there that will let you get a feel for how paintball works while still letting you play the game well. With its combination of a sleek and lightweight design and its user-friendly features, the Azodin Blitz 3 is an electronic paintball marker for beginners. While you might not be able to upgrade too much with this weapon, you can alter it somewhat, adding on an electronic hopper or changing the barrel out as you need. The gun might not grow with you as a player, but it can also be a starting point.

Our Azodin Blitz 3 review can help you figure out whether this electronic marker will meet your paintball needs or whether you might need a different marker. For experienced paintballers, the Blitz 3 might be lacklustre or simply lacking in features that might otherwise be preferred. This should not be the case with young and inexperienced players, however. Let’s take a look at what can make the Blitz 3 an excellent choice for starting players while understanding what does not work well with this gun.

The Azodin Blitz 3 is an electronic marker, so it can be used in either speedball or woodsball battles, depending on your style and preference, though it is not ideal for stealth operations in woodsball. It does come in several bright colors, so if you are a woodsballer or plan on trying woodsball, you should go with the black marker to ensure that you will blend into the surroundings well during battle. The Azodin Blitz 3 is designed to be more compact than its predecessors, which means it is lighter with a compact regulator and a screw-lock feedneck. The gun weighs 2.05 pounds, which was achieved by using a composite material in its creation, allowing it to be both lightweight as well as durable. With the added full-rubber membrane pad, you will find that it is easy to carry around during a battle.

Because it is preferred by beginning paintballers, the Azodin Blitz 3 does not have any complicated features and keeps its electronic options simple and easy to understand. While some of the higher-end electronic markers have more options, the Blitz has everything that you need to get started and do well in a paintball tournament. Without any hoses, unneeded fittings, or other distracting parts, you will be able to focus on the game and not worry about pieces of the gun getting in the way.

The distance on the Azodin Blitz 3 is adjustable and can go up to 300 feet per second. The gun is capable of using either HPA or CO2 for its fire power, in addition to its battery, but the HPA is the recommended form of gas to use with an electronic marker. CO2 runs the risk of building up frost inside of the barrel, causing trouble with your electronic functionality. The gun requires a 9 volt battery to power it as well, which has to be purchased separately. The battery should last for about 1,000 rounds before needed to be replaced or recharged.

The Azodin Blitz 3 is 15 percent lighter than its predecessor, making it lightweight and easy to carry around. In speedball, it is especially important to have a lightweight marker, and Azodin has done its best to provide players with an easy-to-carry gun. The compact regulator helps with its weight, as does the lack of hoses and fittings. The overall weight for the Blitz 3 is 2.05 pounds, which was achieved because of the composite material that was used in its construction. You should keep in mind that if you add on an electronic hopper to the Blitz 3, it will increase the overall weight of the gun.

The goal behind the Blitz 3 seems to be simplicity. The gun is designed to take away guesswork during a battle and let you focus more on the game than what your marker is doing. The Blitz 3 is known for its reliability, which includes not chopping paintballs when it is launched. Even though it is easy to clean, having your paintballs remain intact will make your game less stressful than it would be if ball chopping were a concern.

The trigger is also designed to be sensitive, giving you more control over how quickly you can fire, making it trustworthy when you need it to be.

How Efficient Is The Azodin Blitz 3

Since the design behind the Blitz 3 is so simple, it is efficient to take apart during a battle in the event that you need to. The gun is also efficient in terms of battery usage. It does use a 9 volt battery, which can last for up to 1,000 rounds during a game. Depending on the kind of game you are playing, you should be able to use the same battery for a few different games before changing it to a new battery. Because of the different modes that are available, you can also make sure you are shooting as many balls as you had intended.

When it comes to sound, the Azodin Blitz 3 is not the quietest marker out there. It is not ideal for stealthy combat because you will give your position away pretty quickly. You do have an option to change out the barrel for something a little quieter, but even with the change, this is not a quiet marker. In just about every Azodin Blitz 3 review out there, the loudness of the gun is noted. In speedball, the sound of the marker is less important because the battlefield is less concealed than it is in woodsball, making it easier to have a good idea where your opponents are anyway.

Who Is The Azodin Blitz 3 Best For

The Azodin Blitz 3 is ideal for beginning paintball players. More advanced players might not have the best time with it and have higher expectations than someone just getting their feet wet. That does not mean that the gun is not durable or useful, however, but it means that the low-cost marker is going to give you what you paid for. It is an excellent starter electronic gun. The Blitz 3 does come with all of the standard tournament settings that are needed for speedball and is designed with speedball in mind. That said, the marker could easily be used in woodsball as well, provided you used a darker color. The sound of the gun might make it harder to be stealthy in woodsball, giving away your position earlier than you may have intended, but if you are a beginner, this might not be a big concern for you yet. Because it is not a stealthy design, this is not the right choice for players who would like to recreate a military-scenario type of combat. Instead it is for players just starting out who need some practice or those who would like to dabble in both woodsball and speedball.

The bottom line when it comes to an Azodin Blitz 3 review is that the electronic marker is really for players who are just getting started in paintball and have not worked out all of the things that they would want in a marker. Having something that is more expensive and complicated than the Blitz 3 can make it much harder to learn on and make it more challenging for the players to know what they want to do during a game. Plus, the Blitz 3 is remarkably durable and lightweight, ensuring that you can easily run with it while also ensuring that it will not break on you.

While woodsball-specific markers cannot be used in a speedball tournament, speedball markers, like the Blitz 3, can work in woodsball as well. The Azodin Blitz 3, however, is not a great woodsball choice because of the loudness when the weapon is fired. In woodsball, more stealth and military tactics are required, making the Blitz hard to use. If you are just experimenting between woodsball and speedball, then you might find that the Azodin Blitz 3 is the best option to play a game in each style, letting you find out the best way for you to play paintball.