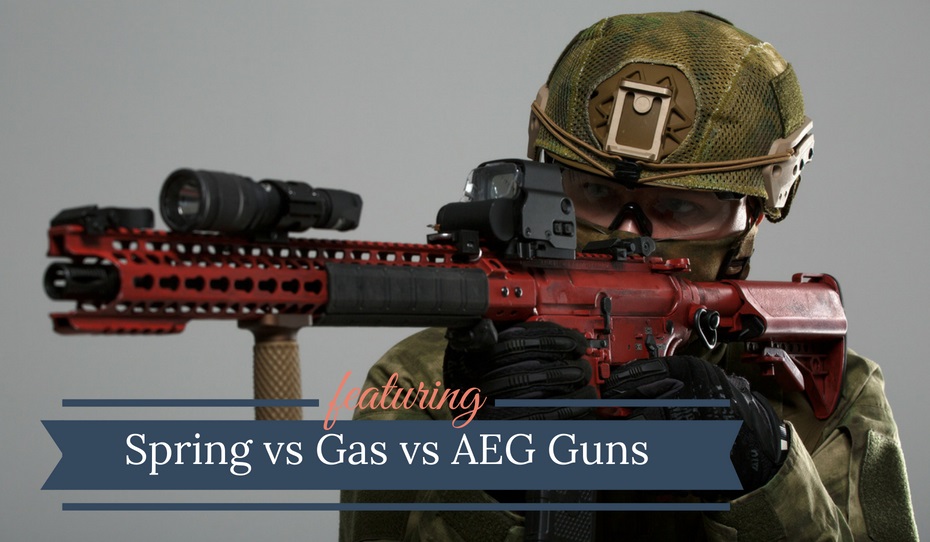 When you are considering buying an airsoft gun, one of the biggest decisions you will have to make is what kind of gun works the best for you.

Even though there are a lot of different models out there, there are other considerations, including how your gun is powered, the role you like to play, and the type of game you play. You need to look at the spring vs gas vs electric options and see what you need to play the game the way you would like to.

Spring-powered airsoft guns use a spring to launch the BBs out of the barrel of the gun. They work as single-shot weapons, so they will not spray a lot of rounds if that is the style of play that you would prefer. They are not capable of operating semi-auto or full-auto, but they are the preferred gun for mil-sim scenarios or for snipers.

Before AEGs came to be, the most popular type of airsoft fun was the gas-powered gun, though they are still preferred by many players. Using compressed air, usually CO2 or green gas, the gas-powered guns work by the compressed air pushing the round out of the end of the rifle, without needing to cock the gun each time. They still have a recoil, much like a live ammo gun, giving you a realistic feeling in the same. Gas-powered guns can either be semi-auto or full-auto by simply holding the trigger down.

Automatic Electric Guns, also known as AEGs are the newest type of airsoft gun on the market. As technology has progressed, the technology of guns has also moved forward. AEGs are powered by a battery and electronic circuit board, allowing you to set the type of fire power you would like to use. As a result, they are consistent and reliable, though usually the most expensive of the lot due to the higher cost of the materials. They have quickly moved to being about as popular as the gas-powered guns as players prefer not relying on having a full gas canister or having the canister in the way. AEGs are also great airsoft guns for beginners.

Another factor to think about when it comes to the type of power that you would like in an airsoft fun is the type of gun that you are using. Most airsoft roles require an airsoft rifle, which will give you more fire power and distance than a pistol can. But not all roles require the use of a rifle. Scouts, for example, would be better off carrying a pistol. Other players might want to carry a pistol as a sidearm in addition to carrying a rifle to give them added protection, especially if they need to reload their rifles.

In terms of fire power, there are not many electric pistols out there because it would be impractical. Pistols are not going to need the automatic functionality that goes with electric guns. Pistols, by design, cannot hold many rounds, so really a spring gun should be the best option. A rifle, on the other hand, usually needs more rounds than a spring action could offer, unless you are a sniper.

Since they are the most popular types of airsoft guns, let’s compare gas vs electric airsoft guns to see which might work better to suit your needs.

When it comes down to it, deciding between spring vs gas vs electric airsoft guns relies entirely on what your specific needs are on the battlefield. Spring-powered guns are a great choice for snipers, pistols, or players who would like a more SWAT feel to their battles. Gas-powered guns will give you a more military feel when you play, but run the risk of losing gas during the game, leaving you without power. Electric guns are definitely the most economical, lightweight, and have the highest shooting volume possible, but they do not offer the same military look and do not work for smaller guns like pistols.

Consider the role that you like to play in airsoft as well as what you hope to get from your airsoft gun. Then, you should know which the right choice is for you.