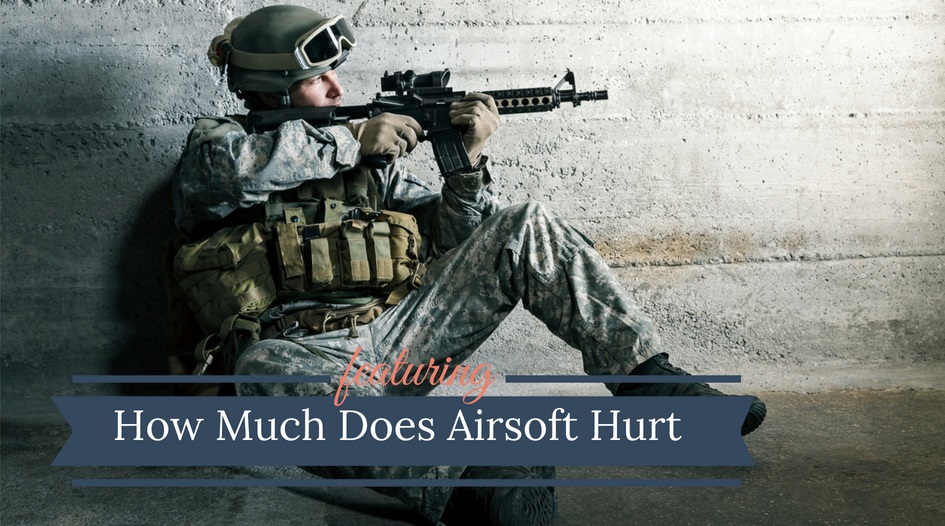 Dodging and diving as pellets fly through the air, trying to avoid the pain as much as possible, it may be your first time playing airsoft and you do not want to get hit.

However, with your adrenaline pumping, tunnel vision, and strategy in-play, you barely notice it making contact—until it stings—or until you get changed and notice a welt or bruise forming in that same spot.

If you're a newbie and you've heard hundreds of stories ranging from “it hurts like hell” to “I didn’t even feel it,” you might be a little hesitant to know who to trust and which extreme to believe.

When a projectile shot of an airsoft pellet heads towards your leg at a bolt action sniper speed of 500 fps, you might want to know this before it makes contact—it might hurt.

How Much Does Airsoft Really Hurt?

This is a difficult question to answer because the response will vary from player to player. Not only does it depend on various other factors, it majorly will vary based on your pain tolerance and the amount of adrenaline rushing through you at that moment. It’s quite difficult to put a number on it for pain tolerance since everyone has different levels. However, if you have played paintball, you can remember what it feels like to get pinned with one of those and go from there.

Does Airsoft Hurt More Than Paintball?

Even though the speed might be a similar fps, the difference between the two is in the projectile weight and mass.

If you compare the two hits, the airsoft bb or pellet weighs about .2 or .25 grams. The paintball usually weighs around 3 grams. This huge difference is what makes a paintball hurt much more (theoretically) than an airsoft bb. Walking away with just a few welts instead of major bruises like the ones you might get in paintball, getting hit by airsoft bbs doesn't hurt as much as paintball.

If you are asking does airsoft hurt, it’s probably because you haven't played it. If you are looking to play it, you might want to know which places are best to avoid (if you can) to get hit—or at least put extra padding on!

The places that tend to hurt the most—where you should probably cover and layer up—are the crotch area, the insides of the arms and legs, the neck, and the ribs or side of your torso. If you also have a body that doesn't have much muscle or fat tissue, you might want to prepare yourself for what’s about to come!

The Three Factors That Can Influence How Much It Hurts Are:

Padding on the layers before you play, especially if you are a newbie, might be in your best benefit. Although you will still feel it—and you should if you need to know when you're hit—the layers will absorb the impact. If you really are thinking of keeping yourself protected, you can also wear a full plate carrier or thick military style clothes. Not only will this make you look more official, it will also help keep you protected!

This is where the science comes in. The heavier the pellet is when it is being ricocheted through the air—the harder the shot will be. As mentioned before, when comparing with the paintball, the bb weighs much less—however, if you are comparing one bb to another, the one that is heavier will have a heavier projectile, carry much more energy, and hit harder, even if it is shot at the same speed.

These are the main three factors that can affect how bad it hurts when you get hit by an airsoft bb. However, there are also other things that may come into play when predicting the sting:

The Angle of Impact and Spin: Although you might not think that this matters, how deep or in which direction it was traveling matters upon impact. Take getting hit in the funny bone as an example—although this would be pretty hard to do, it definitely proves that the angle and exact location of where you were hit can make a huge difference.

The Temperature of the Playing Field: Just like with any sport, if it’s cold outside and a ball gets ricocheted off of your thigh, it’s going to hurt a lot more than if it was warm and sunny outside. Same goes for the shot of an airsoft gun.

The Material of the BB: Whether your opponent is shooting at you with metallic or conventional polymer pellets can make a huge difference when it makes impact.

YOUR Age: Although they may be extremely tough kids, a child has, usually, less pain tolerance than an adult. Therefore, the age of the recipient of the shot can definitely make a difference in how bad it hurts or not.

Getting hit while you're playing airsoft is just a part of the game! If you're playing it correctly, adhering to the airsoft rules, following the fps requirements, trying not to aim for the sensitive areas, and your opponents are doing the same—feeling pain when you're getting hit isn't something you should be particularly worried about.

If you’re new to the game and getting hit and hurt is something that concerns you, layer up! Look into the specialized, protective clothing you can wear while you play to minimize the impact and help cushion the hit. This may make you feel a lot more comfortable while you're playing and ease the worry.